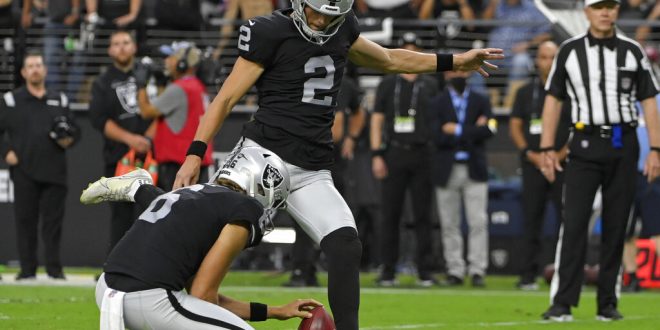 The Miami Dolphins (1-2) fell to the undefeated Las Vegas Raiders (3-0) 31-28 Sunday in overtime. This is the second time in the Raiders’ first three games that they have come back from a two-touchdown deficit to win in overtime.

Miami had a strong start in the first quarter, scoring two early touchdowns to post a 14-0 lead. Dolphin linebacker Elandon Roberts set the initial tone for Miami with an 85-yard pick six at 6:34. That was followed shortly by a 24-yard touchdown run by running back Malcolm Brown.

Miami’s offense wouldn’t go on to score again until late in the fourth. Raiders had ample time to come back. Their scoring run began at the end of the first, after cornerback Casey Hayward tackled Miami wide receiver Jaylen Waddle in the end zone for a Las Vegas safety.

The Raiders dominated the offensive game in the second and third quarters. Kicker Daniel Carlson launched a successful 50-yard field goal to make it 14-5, his first of three field goals of the night. It was a scoreless game for about 10 minutes until Las Vegas fullback Alec Ingold caught a one-yard pass from quarterback Derek Carr. The Raiders now sat just two points from the Dolphins, 14-12.

The third quarter gave the Raiders their edge over the Dolphins. Wide receiver Hunter Renfrow caught a 12-yard pass from Carr at 7:17, now 19-14 Las Vegas. The Raiders furthered their lead in the fourth with a one-yard touchdown run by running back Peyton Barber to hold a nine-point advantage over Miami. But the Dolphins’ offense soon awoke from its two-quarter slumber.

Dolphins’ kicker Jason Sanders landed a 46-yard field goal at 8:30 to put Miami within eight of Las Vegas. In a shocking 82-yard drive, quarterback Jacoby Brissett scored on a one-yard run with the Dolphins going for two. A successful two-point conversion pass to wide receiver William Fuller V tied the game 25 apiece with two seconds remaining in the fourth. Overtime was near.

Las Vegas had the opening drive in overtime and were able to move the ball 55 yards downfield. Carlson connected with the ball for a 38-yard field goal, pressuring the Dolphins offense at 28-25. Brissett and the Dolphins didn’t quit. Instead, the quarterback drove the ball 43 yards before Sanders shot a 50-yard field goal between the posts.

With 2:49 left, the Raiders put it all on the line. In eight plays, the team advanced 72 yards to give Carlson prime field advantage for a field goal. As the clock ran out, Carlson kicked a 22-yard field goal to take the Week 3 win, 31-28.

Next up, the Dolphins will host the Indianapolis Colts Sunday, while the Raiders travel to Los Angeles to take on the Chargers Monday.

Kaitlyn Wadulack is a third-year journalism student specializing in sports and media at the University of Florida. You can reach Kaitlyn at k.wadulack@ufl.edu
Previous Jags Continue Early Season Struggles, Lose to Cardinals
Next Buccaneers end winning streak, Rams remain undefeated