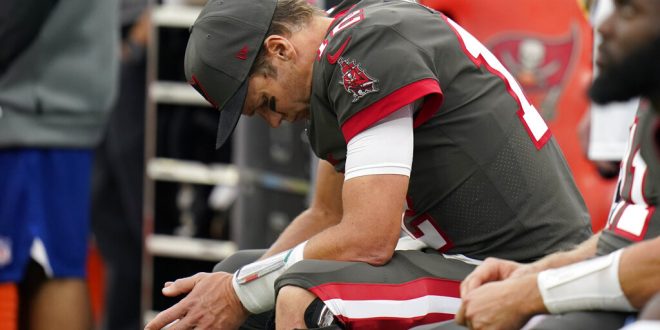 Tampa Bay Buccaneers quarterback Tom Brady looks down as he sits on the bench during the second half of an NFL football game against the Los Angeles Rams Sunday, Sept. 26, 2021, in Inglewood, Calif. (AP Photo/Jae C. Hong)

It was a sour week for the Buccaneers as the Los Angeles Rams ended Tampa’s 10-game regular season and playoff-win streak 34-24.

Kupp brought in a two-yard touchdown for a six-point advantage to close out the first half. He put up 96 receiving yards throughout the game. Stafford is very satisfied with where the team is at now.

Though faced with a tough defeat to the Rams, Tampa Bay held its own on the offense.

Quarterback Tom Brady threw 41 of 55 passes for 423 yards and threw a single touchdown to running back Giovani Bernard. He led in receptions with nine. Throughout the game, Brady threw to ten different pass catchers, including Tyler Johnson, Cameron Brate and Leonard Fournette. Wide receiver Chris Godwin snagged six points in the second quarter with a hand off play and put up 74 receiving yards and six receptions throughout the game.

Tight End Rob Gronkowski walked off the field in the third quarter after a hit to his ribs. He returned to the grass minutes later after a negative X-ray test for fractures. Cornerback Jamel Dean suffered a knee injury.

Tampa heads to New England for an anticipated matchup against the Patriots Sunday, while the Rams take on the Arizona Cardinals.