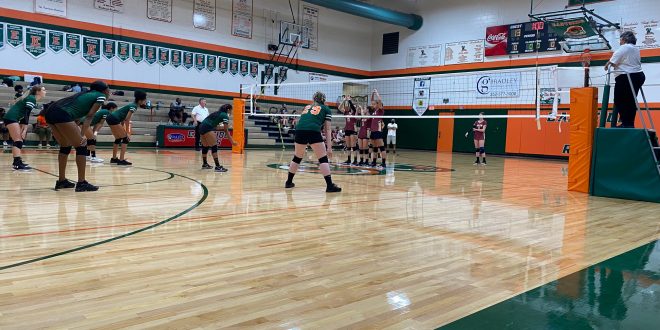 Ironically, an exact month to the day is the last time these two teams faced off, where North Marion was able to win dominantly. Eastside was fired up with energy hoping to get revenge this time around on their homecourt.

In the opening set, the Rams failed to ever really settle in with self-inflicting errors and miscues. To North Marion’s credit, they took advantage of these miscues and jumped out to a quick 18-6 lead. Led by dominant serving and tactical hitting, the Colts were able to fly through set one with a dominant 25-7 triumph in the first set.

Eastside never gave up, they showed pure grit and heart throughout the whole match refusing to fall without a fight.

Eastside was able to play the Colts tight the rest of the way on the back end of their defense. The Rams were constantly able to block the Colts at the net resulting in serious momentum shifts throughout the second set. After a back-and-forth beginning of the set, Eastside found themselves up 19-17 in crunch time. After some clutch serves by the Colts they were able to go on a run to take the set and take a commanding 2-0 match lead.

North Marion once again jumped out to a strong start in the third set with a 15-3 lead early. The Rams never gave up. Once again, they were able to claw back and bring it to 21-19 but ultimately the Colts were able to finish the night off with a 25-19 win in the final set.

“Don’t give up… just keep putting in that effort and never give up,” she said.

Regardless of the outcome Greenlee was able to find positives in the loss and pointed out that her team will grow from this match.

The Rams will use this mindset to take them to their next match with Bronson next Tuesday at home.