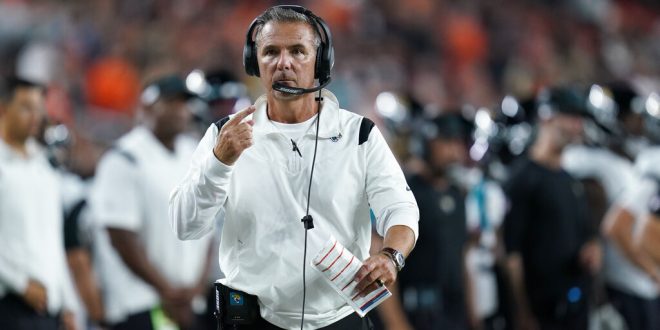 Jacksonville Jaguars head coach Urban Meyer walks with an official during the first half of an NFL football game against the Cincinnati Bengals, Thursday, Sept. 30, 2021, in Cincinnati. (AP Photo/Michael Conroy)

Jaguars coach Urban Meyer apologized Monday for a video that surfaced on social media Saturday. The video showed a young woman dancing on Meyer’s lap. After the loss to the Cincinnati Bengals coach, Meyer did not fly back with the team to Florida instead flew to Ohio to visit family.

While visiting his family, Meyer went to Urban Meyer’s Pint House. While at the restaurant many people recognized him and took photos with the coach. One young woman took a photo and danced with Meyer. While the two were dancing a spectator recorded the interaction and posted the video to social media.

The video grew attention which reflected Meyer, his family, and the Jaguars organization poorly. This resulted in an apology from Meyer.

“I just apologized to the team and staff for being a distraction.” He continued. “just stupid, and so I explained everything that happened and owned it…should not have myself in that kind of position.”

Shortly after Meyer’s apology, another video surfaced on social media with the alleged same young woman. The video showed Meyer inappropriately groping the woman’s bottom while at the bar. Jaguars owner Shad Khan released a statement that said he is confident that Meyer will take responsibility for his actions and make an effort to ensure that the team is well-represented.

The Jacksonville Jaguars are currently 0-4 and have lost 19 consecutive games.