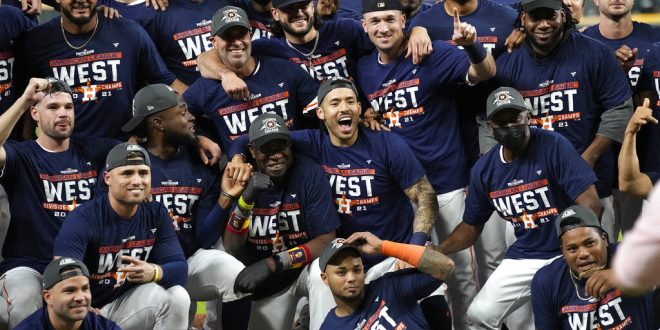 The Houston Astros celebrate after beating the Tampa Bay Rays in a baseball game to win the American League West Thursday, Sept. 30, 2021, in Houston. The Astros beat the Rays 3-2. (AP Photo/David J. Phillip)

ALDS Preview: Who Will Prevail?

Eight teams are remaining this October in pursuit of a World Series title. The Rays are the only 100-win team in the American League and are the defending AL Champs. Will they make it back to the World Series, or will one of the other three make a run of their own?

The Red Sox found themselves in a wild four-team race to the finish line for the AL Wild Card. At any single point during the last two weeks of the season, it seemed as if the two spots could go to any of the four teams. They ended up clinching the top spot and home-field advantage, which proved to be vital in their 6-2 win over the Yankees. After the win, the Red Sox quickly shifted their focus to the Rays. Here’s what Rafael Devers had to say ahead of the series.

During all of this, the Rays were merely chasing history. For the first time in franchise history, Tampa Bay notched 100 wins and safely locked up the top spot in the American League.

Now, the two AL East juggernauts will face each other. In game one, Rays rookie left-handed pitcher Shane McClanahan will square off with the Sox’ Eduardo Rogriguez. The Rays held the edge in the season series, 11-8, and won 11 of their last 15 against Boston. But the margin of victory in each game was about as slim as it gets, with the Rays only outscoring the Sox by two runs.

So, who can make a difference to bring their team to the ALCS? Although he struggled a bit down the stretch of the regular season, Xander Bogaerts proved he’s more than up for the challenge in the postseason, clobbering a two-run home run off Gerrit Cole in the Wild Card game. Another player to keep an eye on for Boston is J.D. Martinez. He missed the Wild Card game with a sprained ankle, and his status remains up in the air for game one.

J.D. Martinez is testing his ankle in left field, after not taking BP on the field with the other Red Sox players. ⁦@MLBNetwork⁩ pic.twitter.com/LsvzhyKR7Z

The pitching duel in game one should be an interesting one, as McClanahan has been excellent over his last four starts, posting a 1.50 ERA. Boston’s Rodriguez posted a 4.74 ERA with 13 wins on the season. McClanahan says he’s ready to go ahead of tonight’s game.

While fans held their breath for a tight finish in the AL Wild Card, the White Sox won their division with relative ease. They were crowned champions of the AL Central a while ago, ending up 13 games ahead of the Indians. Chicago is making a consecutive playoff appearance for the first time in franchise history. Last year, the White Sox lost in the Wild Card series to the Oakland Athletics.

On the other side, the Astros won the AL West in Dusty Baker’s second season as manager. Houston has won the division in four of the last five seasons after the A’s took it in 2020. Here’s what Baker has to say about his team ahead of the series.

Lance Lynn (11-6, 2.69 ERA) will start for the White Sox after a dazzling first season on the team. The starter made his first All Star appearance since 2012. Lynn has his fair share of playoff experience as well, having appeared in 26 career playoff games and winning a World Series with the Cardinals in 2011. He had his fair share of problems with the Astros, though, giving up six runs in four innings when the teams played in June.

Lance McCullers Jr. (13-5, 3.16 ERA) will start for the Astros in another important postseason game. McCullers pitched in Game 7 of the 2017 World Series and Game 7 of the 2020 ALCS, as well as five other playoff starts. This might’ve been the young ace’s best season yet. He led the AL in opponents’ batting average and OPS and ranked second in the AL in ERA. This will be a battle of seasoned, established veterans.

Lance Lynn, who earned himself a two year-extension, gets the nod for Game 1. Here’s what he has to say ahead of the series.

The Astros earned home-field advantage with the better record, so they’ll host at Minute Maid Park. First pitch is set for 4:07 p.m. on Thursday.

I'm a third-year student at the University of Florida passionate about storytelling and sportswriting. My goal is to work in communications for a professional sports team after I graduate.
Previous Chris Taylor and the Dodgers Walk-Off into NLDS
Next Tre’Vez Johnson Talks Gators D