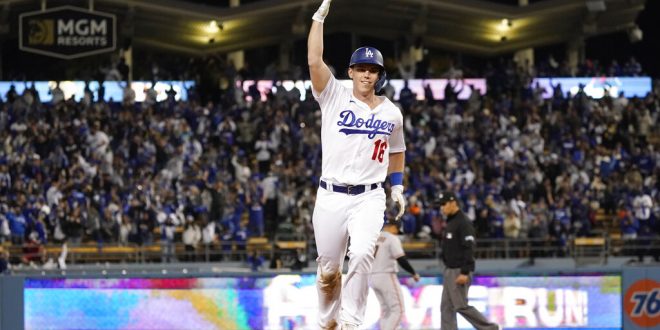 Los Angeles Dodgers' Will Smith runs the bases after he hit a two-run home run during the eighth inning of Game 4 of the baseball team's National League Division Series against the San Francisco Giants, Tuesday, Oct. 12, 2021, in Los Angeles. The Dodgers won 7-2. (AP Photo/Marcio Jose Sanchez)

After defeating the San Francisco Giants 7-2 on Tuesday night, the Los Angeles Dodgers have forced a winner-take-all Game 5 in the NLDS. Game 5 will be played on Thursday at Oracle Park in San Francisco.

So far, the best-of-five divisional series between the NL West rivals has gone back-and-forth. After defeating the St. Louis Cardinals in the Wild Card, the Dodgers lost Game 1 in San Francisco 4-0. Giants’ catcher Buster Posey drove in two runs on one hit. On the defensive side, pitcher Logan Webb struck out 10 batters in the victory.

In Game 2, the Dodgers tied the series with a dominating 9-2 victory. Julio Urias contributed to the win on the mound with five strikeouts in five innings and with an RBI single in the second inning. Cody Bellinger and AJ Pollock each added two-run doubles in the sixth inning to break away.

With the series moved to Los Angeles for Game 3, San Francisco was able to get a much-needed victory to move up 2-1 in the series. A 1-0 victory, the game’s only score came in the fifth inning when Evan Longoria hit a 407-foot home run to left-center field.

The @SFGiants are on the board first. pic.twitter.com/BbKFeAR2OE

With the win, the Giants had a chance to clinch the series in Game 4, but the Dodgers had other plans.

Overall, pitcher Walker Buehler and the rest of the Dodgers’ bullpen impressed the most while shutting down a loaded Giants lineup. In 5.1 innings, Buehler struck out four batters and allowed only three hits. Knowing it was an elimination game, Buehler wanted the start and was pleased with the team’s performance.

The Giants will host Game 5 after the Dodgers hosted the previous two games in the series. Dodgers’ manager Dave Roberts is looking forward to the matchup.

Getting the start for Los Angeles is the left-hander Urias. Starting for the Giants will be the right-hander Webb, who will make history with the start.

At 24 years & 330 days old, Logan Webb will be the youngest pitcher in Giants history to start a winner-take-all postseason game

First pitch from Oracle Park is at 9:07 p.m. on Thursday.

Thursday’s game between the Giants and Dodgers is the final game in the divisional round. The winner of Game 5 will advance to the NLCS, where they will meet the Atlanta Braves. The Braves defeated the Milwaukee Brewers in four games to advance.

In the American League, the Boston Red Sox defeated the Tampa Bay Rays three games to one to advance to the ALCS. They will face the Houston Astros, who advanced after defeating the Chicago White Sox three games to one.