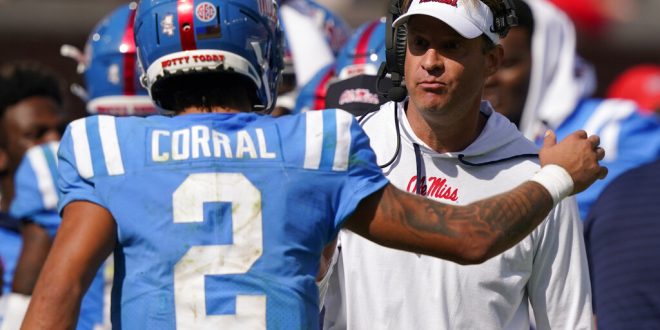 The Tennessee Volunteers, getting hot at the right time, host their former head coach Lane Kiffin and his #13 ranked Ole Miss Rebels at Neyland Stadium this Saturday night at 7:30 p.m.

Energy has taken full swing in Knoxville, as this contest will have Tennessee’s first sellout crowd since 2017.

When the Vols snatched away head coach Josh Heupel from UCF back in January, many expected Heupel to bring his well-oiled offensive scheme with him. He has done just that so far.

At the midway point of Heupel’s first season in Knoxville, the 4-2 Vols possess the 19th-best offense in the country and rank 7th in points per game with 41.5.

Quarterback Hendon Hooker has stepped up nicely as Tennessee’s signal caller. He’s found consistency both in the air and on the ground following two impressive victories over Missouri and South Carolina.

The Volunteers also sport an exceptional running game, featured by Tiyon Evans. However, Evans is not expected to play this weekend due to an ankle injury.

When it comes to Ole Miss, the buck stops with quarterback Matt Corral. Corral has been absolutely sensational this season for the Rebels and is currently a favorite to win the Heisman Trophy alongside Bryce Young of Alabama.

Tennessee’s defense has been respectable this season, but they will need to play on another level in order to keep up with Corral. Ole Miss has the 2nd best offense in America.

Lane Kiffin makes his first return as a head coach to Knoxville since 2010. Kiffin was Tennessee’s head coach for just one season when he left to take a coaching offer at USC.

When asked how he expects be received at Neyland Stadium, Kiffin was not sure. Although he did believe tensions have softened over the years.

It may have been over a decade following the debacle, but the Tennessee faithful will likely not forget when Kiffin takes the field Saturday.

Do Not Expect Defensive Play

The Ole Miss-Tennessee matchup has the highest over/under total in FBS play this weekend with 82 points. In other words, do not expect this to be a low scoring affair.

Both offenses will be exchanging blows the entire game, as this one could very well come down to who scores within the final minute.

It should be an entertaining one in Knoxville. Take Lane Kiffin’s advice and get your popcorn ready.

Previous NLDS Game 5 – Dodgers get last laugh
Next The battle of the unbeaten: Kentucky vs. Georgia