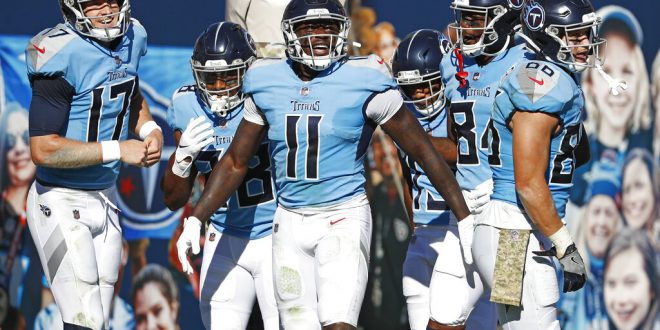 Tennessee Titans wide receiver A.J. Brown (11) celebrates with quarterback Ryan Tannehill (17) after they teamed up for a 40-yard touchdown pass against the Chicago Bears in the first half of an NFL football game Sunday, Nov. 8, 2020, in Nashville, Tenn. (AP Photo/Wade Payne)

Monday Night Football has been extraordinary this year. Bills-Titans was next on the list. Providing some of the greatest games throughout the season so far, last night was no different.

On a controversial decision, the Buffalo Bills decided to go for it on 4th and 1. Sean McDermott decided to call a QB sneak inside the red zone. Josh Allen then tripped and fell, and the Titans won the football game.

The age-old question of situational football resurfaced. Do you kick the easy field goal or try to win the game? Either way, if your team wins you’re a genius, but if your team losses it was a huge mistake.

The Bills go for it on 4th down and the @Titans stop 'em! #Titans pic.twitter.com/1Uqz4mguSJ

Josh Allen threw the ball for 353 yards and three touchdowns in the loss. Stefon Diggs added 89 yards on nine receptions, as well as a receiving touchdown. However, the run game for the Bills was almost non-existent on Monday. As a team, the Buffalo had 82 rushing yards. The highest in attempts? Josh Allen, their QB.

Compare that to last year’s leading rushers’ 20 attempts and 143 yards in Derrick Henry and you can see the disparity. The lack of rushing attack is what allowed the Titans to come back down 10 in the fourth quarter to come away with the victory.

From a Titan’s perspective, this was a much-needed win to prove that they were a competitor in the AFC. A statement win from a team that lost to the Jets a couple of weeks back.

Both the Titans and the Bills move onto 4-2 on the season. The Buffalo Bills go into their bye week after the loss, as the Tennessee Titans will play the struggling Kansas City Chiefs next Sunday at one.

Ethan Sanabria is a second-year telecommunications student on the digital film and television production track at the University of Florida's College of Journalism and Communications. He has previously worked as a broadcaster for the Florida Flight basketball team and currently helps the production of WUFT news facebook lives. You can reach Ethan on any of his social media or at Ethansanabria@ufl.edu.
@ethansanabria
Previous Urban Meyer celebrates first NFL win
Next Gator women’s basketball picked to finish12th

Hawthorne prepares for the playoffs as Friday approaches. Hawthorne is set to play against Wildwood …