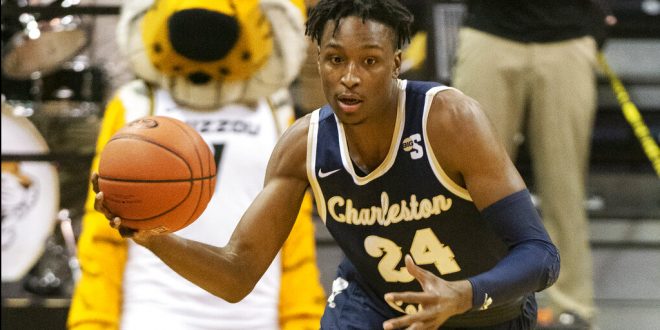 Charleston Southern's Phlandrous Fleming Jr. brings the ball up court during the first half of an NCAA college basketball game against Missouri in Columbia, Mo., in this Tuesday, Dec. 3, 2019, file photo. Florida added three defensive stalwarts via the NCAA transfer portal, led by two-time Big South defensive player of the year Phlandrous Fleming and Summit League defensive player of the year Brandon McKissic, to bolster a lineup the Gators believe will be able to compete in the stacked Southeastern Conference. (AP Photo/L.G. Patterson, File)

Phlandrous Fleming Jr. is heading into his first year with the Gators’ basketball team, and he’s excited to see the team win. He knows the team has a lot of talent, and he expects to contribute in a variety of ways.

Before transferring to Florida, Fleming played at Charleston Southern University where he was the star of the team. In his final year with the team, he averaged 20.1 points, 7.4 rebounds and 2.3 assists.

He has many accolades from his time with CSU including being voted to the All-Big South First Team twice. Fleming was the 2020 Big South Preseason Player of the Year going into his senior campaign and finished second in voting for player of the year.

The team ran through him, so he had to contribute in a variety of ways. Night in and night out, he was prepared to do everything he could to try to help the team win.

Fleming’s high volume with CSU helped him produce some monster games during his three years with the team. Through his last five games there, he was able to notch five consecutive double doubles.

In his final game as a Buccaneer, he even put up a 35 point, 11 rebound game including the game winning three-pointer with 0.6 seconds left in the game. While he’s shown he has the ability to score at will, he prides himself in his defensive ability.

While Fleming is proud of his offensive ability, he feels his calling card is his defensive prowess. He won Big South Defensive Player of the Year in his junior and senior seasons and averaged 1.8 steals in his last year at Charleston Southern.

The 6’5″ guard feels his accolades prove that he is able to help the team outside of just being a prolific scorer.

He knows head coach Mike White values defense and feels that he will be able to mesh well with what the team wants to do.

Fleming’s Expectations for the Team

Fleming acknowledged how much talent this year’s roster has. He said the Gators have a very diverse group of players this season. The Gators don’t expect to play through him as much as CSU did. His role won’t be as big this season, and his body will get to rest more than in years past.

Instead of carrying a burden, he will be able to get his teammates involved when he needs a break. Fleming said all of the players around him are just as good as him or better. Fleming can focus on being his best self and being a leader for this team. He wants to do whatever he needs to do to help the team win.

He is going to use this time with the Gators to win some games and improve his game as much as he can. On an individual level, he hopes to grow as much as he can as a player so he can make the NBA.

Fleming will be a big piece for this year’s team trying to improve upon their 15-10 record from last season. He is a key part of a big group of incoming transfers joining the Gators’ roster. If the Gators want to advance further in the NCAA tournament, they will need him to step up and do what White knows he’s capable of.