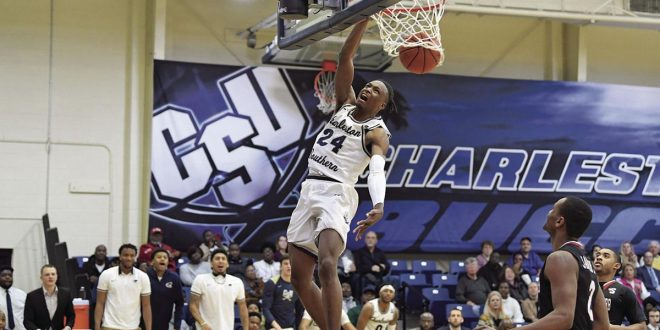 Down by two in the waning seconds of overtime, Charleston Southern guard Phlandrous Fleming Jr. splashed a contested 3-pointer from the wing to clinch a 78-77 victory over Presbyterian.

Fleming’s clutch three capped off a career-high, 35-point performance and marked his fifth straight game with a double-double.

Fleming chose Florida over the likes of Arkansas, Texas A&M, Virginia and Clemson. He averaged 20.1 points and 7.4 rebounds last season and will immediately improve a short-handed Gator backcourt.

The Athens, Ga., native started 60 games and led the Buccaneers in every major statistical category barring assists. Last season, Fleming shot 40.2% from the floor, 28.9% from beyond the arc and 80.3% from the line.

After it lost guards Tre Mann and Scottie Lewis to the NBA Draft as well as Noah Locke and Ques Glover to the transfer portal, Florida’s backcourt was in shambles.

Florida will also welcome four-star recruit Kowacie Reeves. The 6-foot-5 guard/forward is Florida’s top prospect in the class of 2021. The Macon, Ga., native ranks No. 78 in the ESPN top 100 recruits after he received a four-star rating and an 83 overall grade.

Reeves and the trio of guard transfers will join Tyree Appleby and what appeared to be a depleted backcourt until recently. Appleby, who transferred to UF after playing two seasons at Cleveland State, started 17 games and averaged 11.3 points but turned the ball over nearly three times a game.

The Gators struggled in the turnover battle down the stretch last season. Fleming (2.7 TPG) and McKissic (3 TPG) will need to prioritize taking better care of the basketball in order to be successful.

It will be interesting to see how head coach Mike White utilizes these new faces in the lineup next fall. However, one thing remains certain: Florida upgraded its roster, especially its backcourt, Monday.

Hello, I am currently a junior at UF studying sports media journalism with a concentration in Political Science. I contribute web and radio content weekly for WRUF ESPN Gainesville. Be sure to check out some of my recent articles!
Previous Florida Gators Baseball Takes on FSU for Sunshine Showdown
Next New York Jets Set for Historic Draft