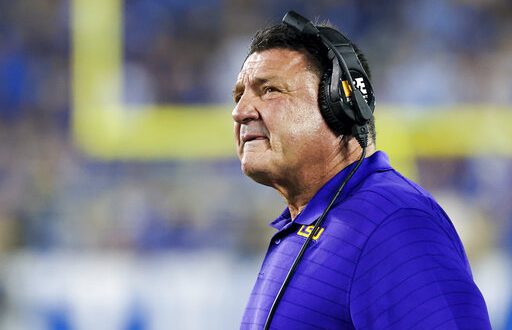 LSU coach Ed Orgeron looks up at the video board during the first half of the tealm's NCAA college football game against Kentucky in Lexington, Ky., Saturday, Oct. 9, 2021. (AP Photo/Michael Clubb)

The LSU Tigers will take advantage of this upcoming bye week.  The team will be having a light week of practice with many players out due to injury. For Ed Orgeron,  he’s treating this bye week like he has any other in terms of recruiting scheduling and improving his team before their game against Alabama.

It has been a rough go for the LSU Tigers this year with the injuries and the product on the field. After a long eight weeks they sit at 4-4 and the injury list continues to grow by the day. Coach Orgeron plans to have light practices for the players, who need to let their bodies rest before the last month of the season. During the SEC media call on Wednesday, he stated that LSU follows a formula regarding practices during the bye-week. The Tigers couldn’t hold their practice or ‘Tiger Bowl’ scrimmage tomorrow due to the number of injuries.

The Tigers travel to Tuscaloosa on Nov. 6 to take on No. 3 #Alabama.

The Tigers will also use this bye-week to make improvements heading into their game with Alabama next week. They need to attempt to improve the ground game. LSU ran for only 77 yards against Ole Miss after running for over 321 yards against Florida. The Tigers need to figure out how to stop the run. LSU is giving up 166.1 rushing yards per game which is 9th in the SEC. The offensive line is next to last in the SEC in sacks allowed only 2.63 per game. Coach Orgeron thinks that defensively they need to work on being more discipline around games, open field tackling. On the offensive side, he hopes to improve protective slants and blocking slants and stunts.

The Tigers will use their bye week to improve on themselves in preparation for their next game against Alabama. Orgeron will be coaching in his last game as LSU’s head coach versus Alabama after agreeing to resign after the 2021 season. In four meetings with the Crimson Tide at LSU, the Tigers head coach has a 1-3 record with the 2019 game at Bryant-Denny Stadium the lone win.