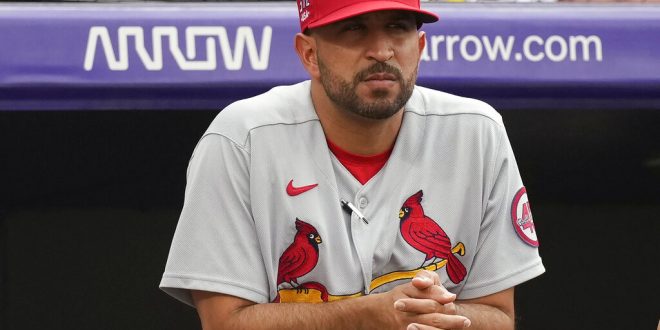 FILE - St. Louis Cardinals bench coach Oliver Marmol watches from the dugout in the first inning of the team's baseball game against the Colorado Rockies in Denver, in this Friday, July 2, 2021, file photo. The Cardinals plan to announce Monday, Oct. 25, 2021, that bench coach Oliver Marmol will be promoted to replace fired manager Mike Shildt, according to a person familiar with the decision. The person spoke to The Associated Press on condition of anonymity Sunday night because the team hadn't revealed the hiring publicy. (AP Photo/David Zalubowski, File)

After firing Mike Shildt on Oct. 15, the St. Louis Cardinals named Oliver ‘Oli’ Marmol as the franchise’s 51st manager. With the announcement on Oct. 25, Marmol becomes the youngest manager in the MLB in 18 years.

Marmol replaces Shildt, who was fired due to “philosophical differences” after three seasons as the full-time manager despite leading St. Louis to a National League Wild Card appearance this season. Shildt had been with the organization since 2009.

At 35 years old, Marmol is the youngest manager in the MLB since Eric Wedge was named the manager of the Cleveland Indians in 2003. Wedge was also 35 at the time of his hiring.

In what is his first season ever as a manager in the MLB, he is currently younger than multiple players on the Cardinals’ roster including stars Yadier Molina, 39, and Adam Wainwright, 40.

Although youthful compared to the other managers around the league, Marmol doesn’t believe his age is impactful. He believes his actions and preparation make more of an impact.

Adding to that statement, he explained that his leadership-style revolves around trust between the players and himself.

As a first-year manager in the majors, Marmol is excited for the opportunity and understands the difficulties that come with the job.

Marmol has a long history with the Cardinals that dates back to 2007. St. Louis drafted Marmol in the sixth-round of the 2007 MLB Draft. After four seasons in the organization’s minor league, he became the hitting coach of the Gulf Coast Cardinals, St. Louis’ affiliate in the rookie level Gulf Coast League.

After that, he became the manager of the Johnson City Cardinals of the rookie-level Appalachian League. During the 2013 and 2014 seasons, Marmol managed the State College Spikes of the New York Penn League. In 2014, he led the Spikes to a league championship.

In 2017, Marmol returned to the Cardinals’ organization as the first-base coach. Two seasons later, he moved to the bench coach, his last position before the promotion to manager.

The 2021 season for St. Louis ended with a 3-1 loss to the Dodgers in the N.L. Wild Card. Overall, the season was headlined by a historic 17-game win streak that helped clinch a playoff position.

Now, Marmol says the goal is a World Series win and nothing less.

Cam is a fourth-year broadcast journalism sports and media major at the University of Florida. In addition to writing and recording radio trendings for WRUF, Cam covers North Florida HS football for The Prep Zone and Mainstreet Daily News and UF football and basketball for Inside the Gators.
Previous Shane Beamer talks Gamecocks bye week before Florida
Next Michigan-Michigan State Meet for Undefeated Rivalry