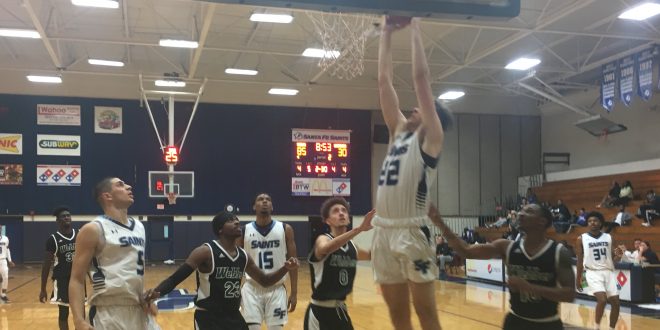 Santa Fe sophomore center Luka Filipovic rises up for the two-handed slam in the second half against Webber on Wednesday, Nov. 13.

The Santa Fe Saints open up their season Nov. 1 against Pro Holmes Sports Academy. But the squad has already tipped off.

The Saints participated in two junior college showcases: the Southeastern Jamboree Oct. 10 in Tallahassee, Florida, and the All-American Jamboree Oct. 16 in Tavares, Florida.

Most notably, Santa Fe captured a win over the University of South Carolina Salkehatchie. The Saints topped the Indians 53-35.

Saints take game 1 vs USC Salk 53-35 in the first game at the @JUCOShowcase. Back in action at 1:20 on Court 5 vs Mississippi Gulf Coast

Head coach Chris Mowry’s roster is filled to the brim with skills. Yet one player’s name rings a bell in Gainesville: Nasir Mann.

Nasir is the brother of Tre Mann, former Florida Gators men’s basketball star. Tre is now a point guard with the Oklahoma City Thunder. But Freshman guard Nasir is his own person, though, Mowry said.

Head Coach Chris Mowry begins his 19th season with the Saints. He said he’s excited about the squad he has this year.

However, with depth comes challenges. Mowry said each of his players deserve playing time.

With Nov. 1 right around the corner, Santa Fe’s starting lineup will be revealed versus PHS Academy at 7 p.m. at home.