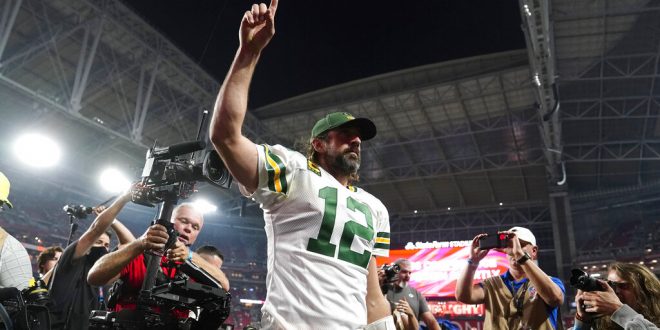 The Arizona Cardinals entered their Thursday-night matchup against the Green Bay Packers as the only undefeated team in the NFL. Led by quarterback Kyler Murray, the Cardinals have boasted an explosive offense that would need to keep up with Packers quarterback Aaron Rodgers.

It came down to the wire, but Murray was just one mistake short, as his final throw of the night would be an interception that closed the game out for Green Bay. In the end, Rodgers and his team would secure a victory by a score of 24-21.

Packers lead after first half

The Packers entered the game without possibly their best skill-position player, Devante Adams, due to a positive COVID-19 test earlier this week. Throughout the game, though, both squads were able to both deliver and rebound from blows from the other team. Arizona got the scoring started with a first-quarter touchdown from running back Chase Edmonds, his first of the year, out of a wild-cat offensive scheme.

Green Bay answered back in the second quarter, when running back Aaron Jones was able to punch his way into the end zone to bring the game to a 7-7 tie. The difference maker before halftime would be another Packers drive, this time resulting in a field goal from Mason Crosby to put them ahead of Arizona by three entering halftime.

A drive from the Packers to open the second half ended in a Rodgers touchdown toss to Randall Cobb, which extended the lead to 10. Murray quickly answered back with a drive of his own, though, marching down the field and getting James Connor the ball for the touchdown to bring the team back to within three.

Green Bay would strike once again to open the fourth quarter, as Rodgers connected with Cobb in the end zone for the second time on the night. Like clockwork, Arizona fired back with a touchdown in response, this one also on the ground from James Connor. Now, though, with the Cardinals still trailing by three, Murray needed to break the cycle and score a touchdown to leap ahead of the Packers.

In the final drive of the game, he got a chance to do it. After working down the field with mere seconds on the clock, the game came down to one play. Murray snapped the ball, looked to the right, and launched the ball into the end zone. His receiver was not turned around to receive the ball, and the ensuing deflection was eventually caught in the end zone by a Packers defensive player. That interception would ice the game for Rodgers and his team.

After the short break from Sunday’s games, the Packers will rest up before playing Patrick Mahomes and the Chiefs on Nov. 7. The Cardinals will go back to the drawing board and prepare for a matchup with the San Francisco 49ers.

Carson Cashion is a second-year student at the University of Florida, and has a major in journalism with a specialization in sports and media. Originally from the Orlando area, Cashion has covered the UF Gymnastics team as well as Oak Hall athletics for ESPN Gainesville.
Previous High School Football Local Matchups This Week
Next Astros and Braves Enter Game 3 Tied 1-1