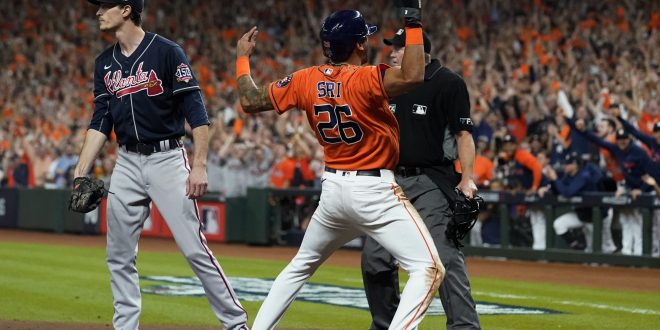 The Houston Astros and the Atlanta Braves head into Game 3 of the World Series tonight at 1-1. Atlanta will have the home-field advantage with the first pitch slated for 8:09 p.m. Both teams will be putting young pitchers on the mound. Houston will start rookie Luis Garcia who has registered a 9.65 ERA and 12 strikeouts this postseason. Meanwhile, Atlanta will pitch Ian Anderson who garners a 2.25 ERA and 12 strikeouts this postseason.

The #WorldSeries shifts to Atlanta with a pair of rookies on the mound.

Game 1 of the series belongs to the Braves while the Astros responded by taking Game 2. The home-field advantage will move to Atlanta as the team competes in their first world series since 1999. Atlanta Braves pitcher Ian Anderson spoke on the Atlanta atmosphere.

Meanwhile, Houston made the world stage in 2019. Astros manager Dusty Baker explained that it is important to put the Game 1 loss and the Game 2 win behind them, and simply focus on the one at hand.

Game 3 will take place at National League Park which means starting line-ups will look a little different as the designated hitter option is gone and pitchers will hit. Houston will likely move their designated hitter Yordan Alvarez to left field, Michael Brantley to right field, and Kyle Tucker to center.

Meanwhile, in order to keep Jorge Soler, the Braves may move him back to right field to put him in place of Joc Pederson.

Parker Welch is a Senior at the University of Florida majoring in Sports Media at the College of Journalism & Communications.
@parkerrwelch
Previous NFL: Packers outlast Cardinals, 24-21
Next Buchholz Bobcats Take On The Forest Wildcats After Major Bolles Defeat