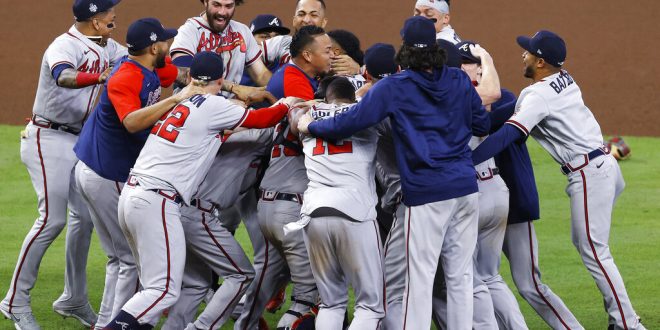 The Atlanta Braves celebrate winning the World Series with a win over the Houston Astros in Game 6 of the baseball series Tuesday, Nov. 2, 2021, in Houston. (Kevin M. Cox/The Galveston County Daily News via AP)

The Atlanta Braves defeated the Houston Astros 7-0 in Game 6 of the 2021 World Series. Here’s how the offseason will most likely look like for both teams.

While the Braves dominated the World Series, the Astros still deserve credit. The Astros offense was deadly this year, ending the season with a .586 average. Many considered this group to be unstoppable, especially with players like Michael Brantley and Jose Altuve. The Astros should be able to keep most of their electric offense, but other problems in staffing seem to have arisen after the loss.

Carlos Correa is a hot name in Houston right now. Correa was an explosive member of the Astros Core Four, playing Shortstop for the team since 2015. Correa became a free agent after the series ended, and has refused to negotiate a contract with Houston at this moment. It is likely seeming that Correa will not return to the Astros, and the team will have to find someone to fill the hole Correa will likely leave. Correa was a key player for the Astros in this postseason, and many will hate to see Correa leave the Astros after six seasons.

More concerning are the rumors about Astros manager Dusty Baker. As the game came to a close, many believed that baker would not return to Houston. This turned the city upside down. Baker has been an integral part of the Astros success, and would be a huge loss. Luckily for Houston, Baker seemed to imply that he would be returning. He claimed that he and the Astros had “unfinished business”.

The city of Atlanta hasn’t slept since the win on Tuesday night. The celebration is well deserved, as the Braves haven’t won a World Series since 1995. As with every offseason, however, there is bound to be shake-ups in the lineup. The biggest question is first baseman, Freddie Freeman. Freeman has played for Atlanta since 2010, and has finally claimed his first ring. Freeman’s contract expires this year, and Atlanta is holding their breath. Manager Brian Snitker seems to be adamant on getting Freddie to return. The only thing Braves fans can do right now is wait and see.

Jorge Soler’s contract has also run out. The World Series MVP has been a godsend to Atlanta, and after his historic home run in Game 6, has become their golden child. Nicknamed “Soler Power” despite his bombs to the moon, he seems likely to return to Atlanta for at least one more season. It may be challenge for the reigning world champs to return all of their free agents however. Notable names include Eddie Rosario, Joc Pederson and Adam Duvall, who were all critical to the postseason in the absence of Acuña. It will be devastating blow to the Braves if even one is lost. On the other hand, the Braves were the underdogs all season, and found a way to win a championship.

Atlanta is not letting next year’s uncertainty dampen their mood however.

So smile Atlanta, the Braves are World Series Champions.

The visiting Houston Texans defeated the Jacksonville Jaguars 30-16 in their Week 15 matchup.Sunday in …