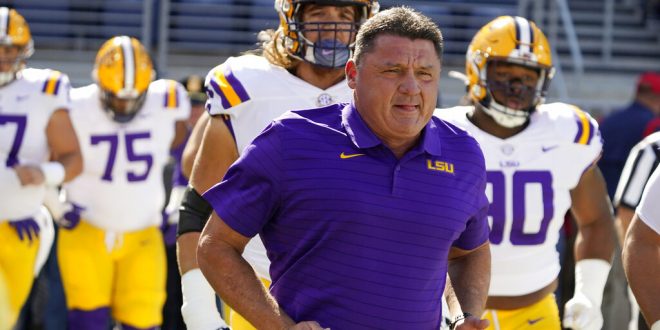 LSU to Host Arkansas in Annual Battle for the Boot

The Arkansas Razorbacks are headed to Death Valley this weekend to take on the LSU Tigers on Saturday.

As the Razorbacks prepare to face LSU, Head Coach Sam Pittman talks on the team as they enter the LSU game this week.

As the Tigers prepare to face Arkansas, Head Coach Ed Orgeron talks on the team.

This isn’t the first time the two teams will meet. The Razorbacks and the Tigers have met multiple times and LSU leads the overall series with Arkansas 42-22-2. In their last matchup LSU beat Arkansas 27-24.

Head Coach Pittman talks on Dominick Johnson and his growth. How he didn’t expect him to be the back that he is at this point.

The game is scheduled for Saturday, Nov. 13 at 6:30 p.m. with coverage on the SEC Network.