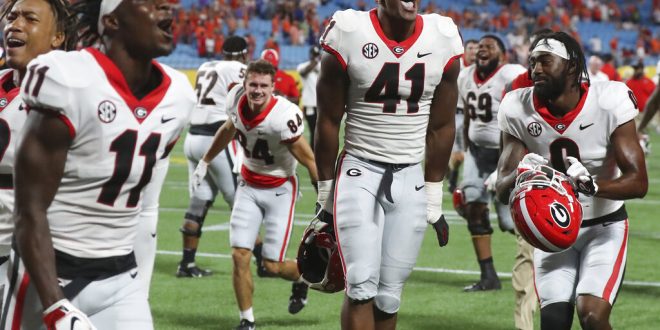 The No. 1 Georgia Bulldogs will travel to Knoxville this weekend to go head-to-head with the Tennessee Vols.

The Bulldogs have yet to see defeat this season, and their nine-game win-streak looks to turn into ten this weekend against the Vols.  They have demolished each team they’ve played, and have held Vanderbilt and Arkansas to zero points.

How have they been so successful you might ask?  The answer is their defense.  Coach Smart has created a solid defense for the Bulldogs- some even call it perfect.  No team has scored more than 13 points against them this season.  They’ve given up only 52 points this season, just 5.7 points per game.

With guys like Jordan Davis, Jalen Carter and Nakobe Dean on the defensive line, the Bulldogs are unstoppable.

The Vols may not have an undefeated season, but don’t let Tennessee’s 5-4 record fool you.   They have a fast-paced offense that Georgia has yet to face this season, and something they can’t even replicate in practice.

In their last game against Kentucky, the Vols only had possession of the ball for 14 minutes the entire game and still won the game 45-42.  Coach Heupel had this to say about the game:

Senior quarterback Hendon Hooker is certainly a threat to Georgia’s defense as Smart called him “a weapon.”  His ability to run, and the fact that he is so difficult to tackle will pose as a challenge for the Bulldogs.

The Vols as they look to see if their fast tempo offense can defeat the one of the best – if not the best – defense in the nation.

Jolie Katzen is a third-year Journalism major with a focus on sports media at the University of Florida.
Previous LSU to Host Arkansas in Annual Battle for the Boot
Next Gators basketball gears up for weekend

JT Daniels has decided to leave Georgia for West Virginia. The quarterback is now at …