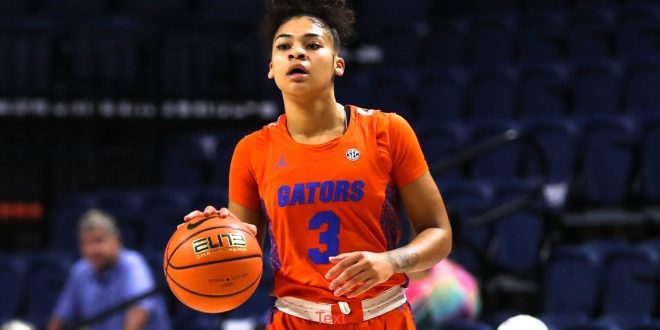 Gators basketball gears up for weekend

The Florida men’s and women’s basketball teams were welcomed back to the O’Connell Center earlier this week in season-opening games for both teams. Full-capacity crowds returned to cheer on the Gators after the COVID-19 pandemic limited capacity last year, and both teams responded with wins to start the season 1-0.

Now, however, the road gets harder. Both teams will face tough competition this weekend, as the women’s team travels to North Carolina for the WNIT Classic, and the men’s team welcomes No. 22 Florida State to town.

After an offseason clouded with controversy, interim head coach Kelly Rae Finley and her team roared to a win over the Georgia State Panthers, 84-70. Fifth-year guard Kiara Smith led the way for Florida, scoring 23 points and shooting 8 for 13 from the field. While the competition level against the Panthers is not comparable to what Florida will face this weekend, the across-the-board scoring is promising; four different players scored in the double digits.

This weekend, the team will compete in the Preseason WNIT Classic in Raleigh, North Carolina. The Gators will get one warm-up game against the Towson Tigers, but the next matchup on Saturday will be treacherous. No. 5 North Carolina State will be looking to bounce back from a loss to No. 1 South Carolina earlier this week, and the Wolf Pack will be hungry for a win. While the final game of Florida’s tournament, a matchup with Wofford, shouldn’t be insurmountable, a matchup with the fifth-best team in the nation will be the hardest test of the Gators season until conference play.

The four new transfers into the men’s basketball program made their debut in orange and blue against Elon, defeating the Phoenix 74-61. Familiar names like Colin Castleton and Tyree Appleby got their share of the points on Tuesday, but transfer Myreon Jones finished as the leading scorer. The product of Penn State was labeled a sharpshooter entering the season, and he showed the fans why; shooting 4-8 from deep range, Jones racked up 20 points in 27 minutes. He was also second in rebounds on the team, grabbing six boards.

Despite the hot hand of Jones, the Gators will need more firepower than just him when they face a familiar foe in the O’Dome on Sunday. Florida State delivered a triple-digit clinic of offense in its first game against Penn, winning 105-70, and the ‘Noles will look to do the same against the Gators. Florida’s defense and the energy of a full-capacity crowd will make life hard on the Seminoles, but Florida will need scoring to come from every branch of the team if the Gators want to pull off the upset.

The women’s basketball team begins on Friday, playing Towson at 4:30 p.m. before playing NC State on Saturday at 2 p.m. The team will wrap up the trip on Monday against Wofford at 4:30 p.m. The men’s team will play Florida State on Sunday at 1 p.m.

Carson Cashion is a second-year student at the University of Florida, and has a major in journalism with a specialization in sports and media. Originally from the Orlando area, Cashion has covered the UF Gymnastics team as well as Oak Hall athletics for ESPN Gainesville.
Previous No. 1 Georgia hosts Tennessee
Next Florida Volleyball Travels To Arkansas To Face Razorbacks