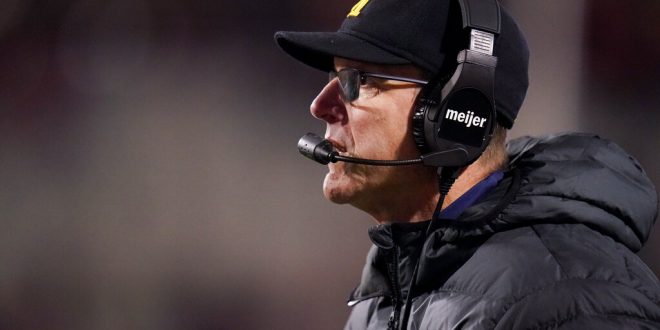 No. 4 Ohio State, according to the College Football playoff poll, will be traveling to Ann Arbor to take on No. 6 Michigan in a crucial rivalry game this Saturday.

Ohio State is coming off of a 56-7 win over Michigan State. Buckeyes freshman quarterback C.J. Stroud is now at the top of the list in the Heisman discussion after his standout performance this past weekend. Stroud recorded 432 yards, six touchdowns and a completion percentage of 91.4.

Wolverines head coach, Jim Harbaugh previewed the match up stating the significance of a win for either program.

Harbaugh went onto discuss that this game is a defining moment in both programs’ playoff destiny.

The Wolverines are coming off of a 59-18 win over Maryland. Harbaugh listed the strengths of Michigan heading into the weekend game as the following:

Furthermore, the Buckeyes are led by Freshman running back Treveyon Henderson in rushing with 1,098 yards. While sophomore wide receiver, Jaxon Smith- Njigba, leads the offense in receiving yards with 1,132 yards.

The Buckeyes have three wide receivers that have recorded more receiving yards than Johnson, Michigan’s leader in receiving yards. As Harbaugh highlighted defensive stops, it will be critical for the Michigan secondary to contain wide receivers, Jaxon Smith- Njigba, Garrett Wilson and Chris Olave.

The annual rivalry game between the two programs was canceled in the 2020 season. The Wolverines have not won a game against the Buckeyes since 2011.

According to ESPN’s Football Power Index, the Buckeyes have a 61.8% probability of defeating Michigan.

The news has spread. Joe Judge is out today. Who want’s to be a part …