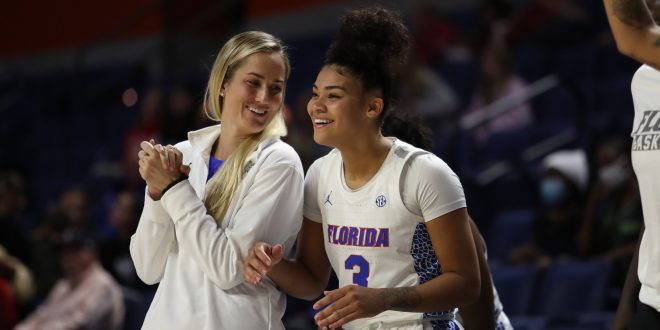 Coming off the bench, sophomore forward Jordyn Merritt, led the balanced offensive attack by the Gators. Merritt, finished the game with 13 points shooting a team best 3 for 4 from three-point range.

For the starters, guards Kiara Smith and Nina Rickards joined the party, scoring a solid 11 points each.

Since suffering a 33-point defeat to then number five North Carolina State, Florida has racked up four consecutive wins. A continued recipe for the Gators throughout this streak has been their defensive dominance.

After falling behind 5-2 early in the first quarter, a Lavender Briggs three with 8:05 remaining kickstarted a 11-3 run for Florida. From there, the Gators took a stranglehold on this matchup, never once relinquishing the lead. Florida led the Billikens (1-4),19-12, after one.

Rickards hot start early gave the Gators a much need spark, scoring seven of the first 1o points for the Orange and Blue. For the game, Rickard had a team-high seven rebounds.

Merritt made all three of her field goals in the first half, scoring seven points in her first game back in the lineup since North Carolina State.

In the second quarter, Florida had its second-best defensive performance this season. The Gators held Saint Louis to an impressive 14.3% from the floor, as they only scored seven points in the period.

Heading into the half, Florida led 40-19, outscoring Saint Louis by 14 points in the second quarter.

Also, this marked the first time Florida scored 40 points in a half this season.

Florida coach Kelly Rae Finley and the Gators didn’t miss a beat as they stormed into the second half with a 6-0 run. This gave the Orange and Blue their largest lead of the evening at 27 points.

George Washington Up Next

Coach Finley and the Gators are back in action Saturday for their second game of the tournament.  Florida will take on George Washington Colonials, in hopes to improve their winning streak to five games.

For Florida, this will be the second consecutive game they face off against a team from the Atlantic 10 conference. Tip off is set at 7 p.m.

Previous Ohio State at Michigan: Harbaugh: “Both teams have a lot on the line”
Next 5 Top Storylines from Regional Finals: Hawthorne Takes Down Pahokee