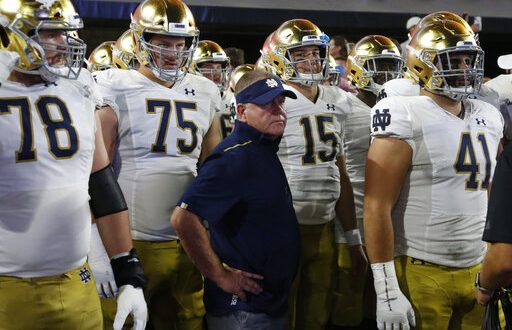 The Search Is Over

Brian Kelly has been named the next LSU Football coach! pic.twitter.com/AaZBOE2koc

Kelly is on a 10-year, $95-million contract with the Tigers, including incentives.

His Time with the Fighting Irish

Brian Kelly has been with Notre Dame since 2010. In his time with the program, Kelly became one of the top coaches for the franchise. He was 113-40 overall with the team and led them to two college football playoffs in both 2012 and 2018, but suffered losses both times. He also guided the team to the 2013 BCS Championship Game. After Kelly made the decision to hire defensive coordinator Marcus Freeman, the team improved and was even projected to have a top-five recruiting class in 2022.

The latest college football playoff rankings placed Notre Dame in the no. 6 spot, after finishing off their season 11-1. They only fell to Cincinnati.

Before Notre Dame, Kelly served as head coach to Grand Valley State, Central Michigan and Cincinnati. At Grand Valley, he led them to NCAA Division II Football Championships in both 2002 and 2003.

Fans believe LSU shifted their focus to Kelly after Lincoln Riley got taken off the market by USC. The Tigers brought in Kelly to replace Ed Orgeron, after being almost two years removed from an undefeated season and national championship. Orgeron has spent five years with LSU and had a 51-20 record. Back in 2019, he led the Tigers to a perfect season, 15-0 and a national championship. Orgeron agreed to a $17 million buyout to step down back in October.

Kelly was on the road recruiting for the Fighting Irish when news broke. He messaged the players Monday night and apologized to them for finding out the news of his departure via “social media or news reports”.

The plan is for Kelly to meet with the team tomorrow at 7 a.m.

Here is the full message pic.twitter.com/sqAl2txZIy

Brain Kelly is going to be introduced come Wednesday via a news conference at 1 p.m.

Sara Dastgerdi is a current student at the University of Florida.
Previous Williston Red Devils Win on the Road 60 – 50 Against the Bronson Eagles
Next Napier’s Louisiana to Face Appalachian State in the Sun Belt Championship