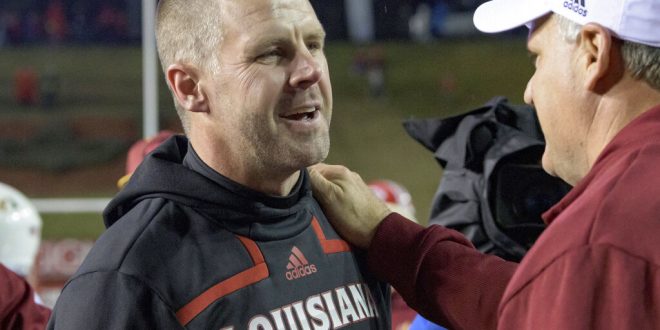 The Louisiana Ragin’ Cajuns host the Appalachian State Mountaineers in the Sun Belt Conference Championship on Saturday. Now Florida head coach Billy Napier and the Cajuns look to win the program’s 10th conference title and the first since the Sun Belt introduced the conference championship game.

The Cajuns finished their regular season with an 11-1 record, making three straight seasons with at least 10 wins. Despite a week one loss to Texas, Louisiana dominated the remainder of their schedule. The Cajuns finished 8-0 in conference play, including a 41-13 win over Appalachian State. Louisiana also picked up a huge non-conference win by defeating Liberty 42-14 on the road.

They won the Sun Belt West for the fourth straight year and for the third time in those four years they face Appalachian State for the conference championship.

Napier is confirmed to be coaching for Louisiana during the Sun Belt Championship Game. Whether he coaches in their bowl game is still up in the air. Should the Cajuns win on Saturday, they will play in the New Orleans Bowl on Dec. 18. Louisiana has not named an interim coach should Napier leave prior to the bowl game.

Under Napier, the Cajuns have been a very run-heavy team. During the 2021 season, they put up almost as many yards on the ground as they did through the air. 29 of the 49 touchdowns scored by Louisiana this season were also scored on the ground.

The workload has been very balanced between all of Louisiana’s running backs. Their leading rusher was Chris Smith, who put up 834 yards and eight touchdowns on 144 carries. After him, Montrell Johnson rushed for 776 yards and 11 touchdowns, and Emani Bailey rushed for 431 yards and five touchdowns. Quarterback Levi Lewis also contributed to the run game, rushing for 226 yards and four touchdowns.

All in all, the Cajuns averaged 31.3 points per game this season via an efficient mix of personnel and of pass and rush.

On defense, Louisiana led the Sun Belt in points allowed per game with only 18.5. That figure is also 13th best nationally and third-best in the group of five. The defense allowed 349.7 yards per game, but their ability to force turnovers made up the difference. The Cajun defense created 20 takeaways this season on 11 fumbles and nine interceptions.

Putting the turnover-happy defense alongside their safe offense led to Louisiana being tied for the fourth-best turnover margin in the country at plus-12.

Louisiana already defeated Appalachian State earlier this season by a wide margin. Even so, beating any team twice is difficult. At 10-2, the Mountaineers are still a good football team and will for sure be looking for revenge on Saturday.

Saturday marks the fourth rendition of the Sun Belt Championship game and the third time the two schools have met. Appalachian State won the first two.

Both teams have a lot to play for in this game. It is a conference championship after all. Appalachian State is vying for their fifth Sun Belt title in the last six years and to avenge their only conference loss from the season.

Louisiana looks to turn the tide in the conference championship game. Having lost to these same Mountaineers twice in the three seasons prior, perhaps the third time is the charm. In what is potentially the last game for beloved head coach Billy Napier, they will also be playing their hardest to send him out a winner before he travels to Florida.

The game takes place out of Cajun Field in Lafayette, LA. Kickoff is set for 3:30 p.m. EST on Saturday. Appalachian State is currently listed as a 3.0 point favorite with the game airing on ESPN.

Jack Shivertaker is a senior at the University of Florida pursuing a degree in Journalism with a focus on sports media.
@JackShivertaker
Previous Brian Kelly Moves to LSU
Next Gators Women’s Basketball Team Continues on the Road, Looking to Keep Up 5-Game Winning Streak