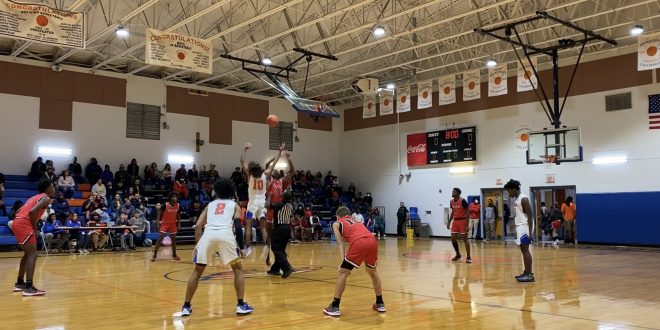 After a week off of school and practice, the Williston Red Devils (2-0) faced the Bronson Eagles (1-1) on Monday night. The 2021-2022 basketball season only started just two weeks ago, so both teams were looking to keep their undefeated record clean and give their opponents their first upset. Despite a hard-fought game between both teams, the Red Devils left Bronson’s gymnasium last night with a 60-50 win.

Tensions were high between both teams and the fans. Within the first minute of the game, the Red Devils gave up possession of the ball and fouled an Eagles’ player giving them the opportunity to get the first points of the game. However, that just pushed the Devils even more. Point Gaurd JT Tipton quickly showed that he would be the main playmaker and point scorer for the Devils by making his first three-point field goal of the night.

The Eagles started to take the lead, but shooting guard Javon Brown also made a name for himself by getting fouled on a layup that tied the game and made the score 9-7.

Each team struggled throughout the first quarter with talking and making plays that wouldn’t end up turning over the ball. Trying to work out the kinks after the first time out, the Devils started breaking away with a 20-11 lead in the first quarter with help from Tipton making his third three-point field goal right before the buzzer ran out.

The Devils came out of the break ready to score. Tayelen Seabrook did not waste time and quickly went for the two-point field goal, 22-11.

Mistakes that were being made in the first quarter were not being made in the second. The only problem that Williston struggled with was fouling throughout the whole game. This is where Bronson racked up most of their points.  Edariyon Wesley continued to foul the Eagles, but after each foul, he would look to the bench for advice on how to correct himself.

Even though the Devils were making these mistakes they were able to make up for it in scoring. Right before the half ended, Tipton moved from one corner to the other trying to make a play. Brown noticed and passed him the ball and Tipton made his fourth three-pointer of the night from the corner.

The Devils ended the first half with a small lead 28 to 20.

After halftime, the Devils reverted back to their first-quarter mistakes. Their problem this half was taking too long to pass the ball. Wesely stood at the top of the court pressured by the Eagles waiting for his teammates to get open, but took too long and turned over their possession three times in the third quarter.

At one point, Jaynin Staten made a fast break towards the net, but an Eagles’ player came out of nowhere and shoved him to the floor. This caused a fight between both teams to break out and resource officers had to get involved. Many of the fans also started to chime into the fight, but the argument was able to be broken up before it escalated. The referees gave the foul to the Eagles and gave the Devils the opportunity for foul shots.

The third quarter score was neck and neck up until the end and the Devils still held onto a 43-33 lead with Tipton making two out of 3 of his foul shots.

In the final quarter of the game, Tipton set up his teammates to start scoring some of the points. One stand-out play of the quarter was when Tipton passed the ball between an Eagles’ player’s legs to Ryan Williams and he was able to go for the layup and make the score 55 -41.

Nearing the end of the game, the Devils proved to be the best team in the gymnasium last night by scoring the last few points that includes another three-point field goal from Tipton.

The Devils gave the Eagles their first upset of the season with a 60- 50 win.

The Williston Red Devils (2-0) will host the Gainsville Hurricanes (1-0) at home on Thursday, Dec. 2 at 7:30 pm. This will be an interesting match-up between the teams because one will come out without a clean record.