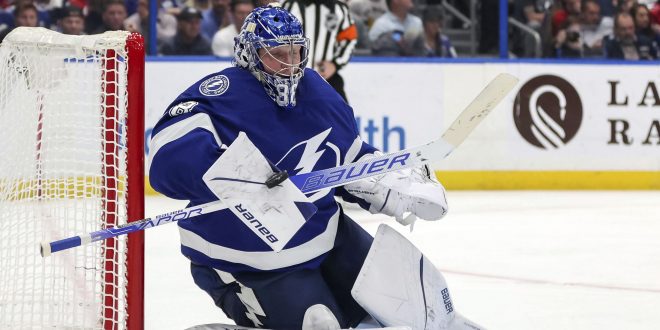 Tampa Bay Lightning goaltender Andrei Vasilevskiy, of Russia, makes a save against the Washington Capitals during the third period of an NHL hockey game Monday, Nov. 1, 2021, in Tampa, Fla. The Lightning won 3-2. (AP Photo/Mike Carlson)

With less than three minutes remaining in the game, the Tampa Bay Lightning were able to turn a 2-1 deficit into a 3-2 victory over the Montreal Canadiens on Tuesday. Tampa Bay’s victory comes exactly five months after the Bolts beat the Canadiens in the 2021 Stanley Cup Final.

First time the Lightning have played the Canadiens since: pic.twitter.com/vaR0yIbDLk

Tampa Bay’s season has not gone as expected as the Lightning have not been getting the best of starts. Moreover, the Bolts have struggled throughout the season to find hot starts with an early lead. Nonetheless, the Lightning struck first on Tuesday after Pat Maroon racked up an early shot lead on a turnover by Kale Clague.

Clague was making his debut for Montreal but ended up making the costly mistake after whiffing the shot from behind Montreal’s net. Maroon then spun-and-shot for the score to give the Bolts a 1-0 lead in the first period. The following play would see some fierce back-and-forth power play between the teams without producing any additional goals.

The second period saw a much more dominant Montreal team, which would pay off as Nick Suzuki and Mike Hoffman each scored to give the Habs a 2-1 lead. After a scoreless second period for the Bolts, Tampa Bay had a wake up call in the final 20 minutes of the game.

How Tampa Bay secured the win

Andrei Vasilevsky in particular stepped up when the Lightning needed him most, finishing the contest making a total of 21 saves. He stood firm to deny a shot by Artturi Lehkonen to keep the matchup at a one score game in the third.

With 2:06 remaining in the game, Corey Perry would score the tying goal to even the game 2-2.

COREY PERRY! Perry sets up in front and redirects one home to tie it up!#GoBolts pic.twitter.com/XizDpTfFvi

Finally, Ondrej Palat scored the winner for the Bolts with only 38 seconds to go in the third period of the game.

What’s next for the Lightning

The Bolts will look to build on their victory as they will travel to face the Toronto Maple Leafs on Thursday for the fourth game of a five-game trip. The puck is set to drop at 7:00 p.m. at Scotiabank Arena and the game can be watched on ESPN+.

Tori Edwards is a fourth-year Telecommunications student specializing in News with an outside concentration in Sport Management at the University of Florida. Tori works as an author and reporter for WRUF.com and is the voice of trendings on Wednesday mornings on ESPN 98.1 FM - 850 AM WRUF. You can reach Tori at victoriaedwards@ufl.edu.
@ToriEdwardsNews
Previous Saint Francis Wins 4-2 In a Hard Fought Game Against Dixie County
Next Is Portland Really Dame’s Home?