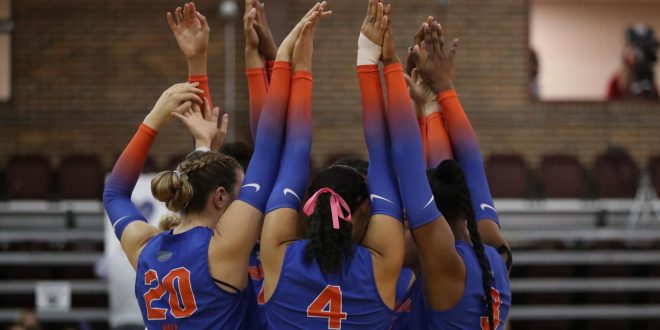 After winning back-to-back matches in the NCAA Tournament, the Gators season is over. The No. 1 seeded Louisville continue their purge through the tournament after crushing the Gators in three straight sets.

Despite a closer second match, Florida was outplayed by the undefeated Louisville. Florida started off hot in the first set securing three consecutive points. However, a kill from Amaya Tillman kickstarted an eight-point run for Louisville. From there, it was a back-and-forth volley between the two, with Florida and Louisville racking up kills.

The Cardinals get it done, taking the last three points. They win the first match 25-16.

After dropping the first set, Gators came out with vengeance. Both teams worked effortlessly on the court, but it was close the entire match. Back-to-back kills off the hands of Thayer Hall put Florida up 21-17.

WITH THE EXCLAIMATION POINT ❗️

It wasn’t enough though. Louisville’s Claire Chaussee and Aiko Jones killed the ball, bringing the game to a tie 22-22. Cardinals would collect  the final three points.

The third set didn’t go the Gators way. Louisville came out rocking taking a hefty 13-6 lead. After a few points from the orange and blue, Florida clawed their way up to 10 points off of Marlie Monserez’s kill. Cardinals still led 17-10. Louisville began to truly dominate putting up six more points, with just two points to go to secure victory.

And they did it.

Florida entered the tournament as the 16th seed, eventually being eliminated by No.1 Louisville. Despite the absence of T’ara Ceasar, Florida still competed, winning back-to-back rounds before their elimination.

Florida finishes with a season record of 22-9, 14-4 in the SEC. While it was not the finish they wanted, Florida can be proud of the season they had and their overall performance in the tournament.

After a shaky start to the season, Florida Gators volleyball currently has a six-game winning …