The Buchholz Bobcats may have lost the state semifinal 45-7 Friday to St. Thomas Aquinas, but the Bobcats rode the long way home from Ft. Lauderdale, Florida, with great pride.

Two seasons ago in 2019, the Bobcats finished 5-5. In the midst of an unprecedented pandemic and numerous school bomb threats, the Bobcats finished this season 12-2 and one win away from playing in the FHSAA 7a State Championship Game for the first time since 1990. Quarterback Creed Whittemore and wide receivers Quan Lee and Adrian Sermons were the core of the success for this team.

Whittemore finished his junior year 116/195 with 2,101 passing yards. He had 24 passing touchdowns to only six interceptions. Additionally, he led the team in rushing yards with 763 yards on the year. The dual-threat quarterback also accounted for eight rushing touchdowns.

Defensively, the Bobcats were also strong. Seniors Daryus Boyd and Jahari Clemons played a big role in Buchholz allowing an average of 10.4 points per game. The defense remained strong all year until their last game where they gave up a season-high of 45 points to St. Thomas Aquinas.

Difficulties off the Field

The Bobcats faced an array of challenges at the start of the season. The first week of Florida high school football games was unpredictable for many teams as COVID-19 resurged. Buchholz was forced to cancel its week one matchup with Ocala Trinity Catholic due to COVID-19 within the program. Instead, the Bobcats played a last-minute matchup with the Dunnellon Tigers, who also had their game canceled due to COVID-19 issues with their planned opponent.

As COVID-19 loomed over with the potential to cancel more games to come, larger issues began to surface for the Buchholz community. Buchholz High School received four false bomb threats throughout August and September, which sent the community into a panic. The school was evacuated on multiple occasions, as students, teachers and parents waited for an arrest to be made and end to be put to the horrifying disruptions to their 2021-2022 school year.

On September 13, 2021, a 17-year-old Buchholz High School student was accused of making false threats along with other charges and taken to Gainesville Juvenile Assessment Center. The team and Buchholz students together were faced with the difficulty of knowing one of their own had caused the community uproar.

The Bobcats had increased security for football games during this time of unrest.

There is no denying that this Bobcats team knows the meaning of perseverance. The team has come a long way in the past two years, seeing major improvements all around. Many attribute this success to the unbreakable bond that blossomed amongst these players as they pushed through the hardships they were presented with not only this season but over the past two seasons dealing with the impacts of the pandemic.

Many of the players who will graduate this year have built a bond unlike any other. Players like Sermons and Lee have served as a unifying force for the team, showing that the motivation behind this successful season meant much more than just a game.

Buchholz Athletic Director George Atohi is particularly proud of this season’s outcome: “For me, I taught some of these kids since middle school, and they are amazing young men,” said Atohi. “Their successful performance in school most importantly, and football is just the beginning. They are a hard-working group.”

That’s a wrap on the 2021-2022 season. I love y’all boys it was fun while it lasted. Imma miss y’all seniors y’all made practice and work outs enjoyable at the highs and even the lows of this season. Can’t believe it had to end this way. Logging off for tonight #74 #inthebooks pic.twitter.com/zVoHBOZwKa

Quan Lee is committed to the University of Central Florida to continue his academic and athletic career. Sermons and the defensive seniors have yet to announce their future plans. Whittemore on the other hand will return for his senior season. Buchholz will have to rebuild with the loss of many impact players but plan to pick up right where they left off.

I’m proud of my team and my school making it to the final 4. Best believe we’ll be back this is a power house

Previous Meyer Talks Jaguars, Robinson Ahead of Titans
Next The Buccaneers to host the Bills 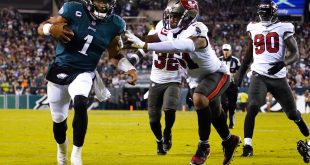