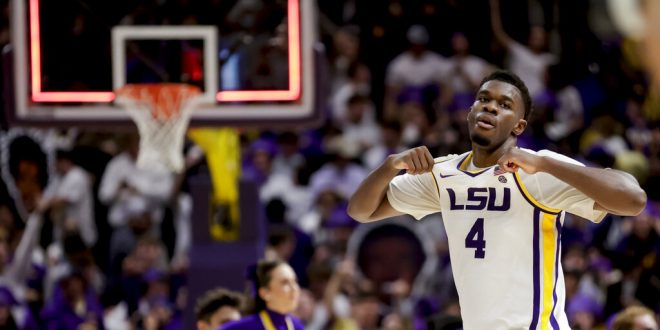 As fans gear up for the Alabama-Georgia rematch in the CFP National Championship, the SEC will also highlight quite a few marquee matchups in college hoops on Saturday. All 14 SEC men’s basketball programs will play a conference game on Saturday for the first time this season. Five of these programs enter the weekend ranked in the AP Top 25, with Auburn on top at No. 9 in the country.

Among some of the best matchups are No. 21 LSU hosting No. 18 Tennessee, No. 16 Kentucky hosting Georgia and No. 9 Auburn hosting Florida. Here’s a gameday guide to know which games to watch and which teams in the SEC will have a good weekend.

The 10-4 Arkansas Razorbacks travel to face the 12-2 Texas A&M Aggies looking to break out of a skid after starting their season 9-0. They’ve lost four of their last five games, including double-digit losses to Oklahoma and Mississippi State and a shocking home loss to Hofstra.

On the other hand, the Aggies have been trending up as winners in eight of their last nine games. They’ve also won their last eight home games, averaging 82 points and giving up 58.4 points in those games.

The 13-1 Tigers host the 10-3 Volunteers Saturday at 6 p.m. looking to break a four-game losing streak to Tennessee. Both teams are coming off SEC wins, with the Vols defeating Ole Miss 66-60 in overtime, and the Tigers knocking off No. 16 Kentucky 65-60. The Vols lost to the Tide 73-68 to start SEC play, so they enter Saturday’s game with a 1-1 conference record, while the Tigers enter at 1-0 in the SEC.

Will that hold up?

The Tigers have played particularly well at home. They’ve won their last nine games at Pete Maravich Assembly Center, rocking an 8-0 home record on the season. Santiago Vescovi and Kennedy Chandler lead the Vols offensively, averaging 13.5 and 12.3 points per game, respectively. Vescovi led Tennessee with 17 points in their win against Ole Miss.

For the Tigers, Tari Eason and Darius Days both average over 14 points per game on the season. Eason led the way for LSU offensively in their win against Kentucky. This Top 25 matchup will tip off at 6 p.m. on ESPN2.

The 11-3 Wildcats host the 5-9 Bulldogs Saturday at 6 p.m. coming off their first SEC loss to LSU on Tuesday.

The Bulldogs lost in heartbreaking fashion on a last-second three-pointer to Texas A&M in an 81-79 game on Tuesday. They’ve lost four of their last five games, including double-digit defeats against George Mason and Gardner-Webb. They won’t find any solace to start their conference schedule, facing the ranked Wildcats, as well as Mississippi State and Vanderbilt teams that have each won at least nine games.

The Wildcats, on the other hand, have been dominant in their wins this season, winning by over 30 points in four different games this season. However, they’ve struggled on the road, losing both of their two true road games against Notre Dame and LSU. Their last loss to LSU came at an extra cost, too, losing Sahvir Wheeler to injury after he ran full speed into a legal screen. Wildcats coach John Calipari said Wheeler is “day-to-day” with a neck injury.

Could Sahvir Wheeler play tomorrow against his former team?

John Calipari had an update for the #BBN this afternoon ⬇ pic.twitter.com/2ek6bqWn7f

Wheeler, a junior transfer from Georgia, would have had the chance to face off against his former team on Saturday, but his status is now up in the air. The Dawgs and Wildcats will face off in Rupp Arena at 6 p.m. on SEC Network.

The Gators will also travel to take on No. 9 Auburn in their second straight ranked game. The Crimson Tide will look to pick up their third SEC win against Missouri on the road at 3:30. 9-4 Vanderbilt hopes to continue its hot start to the season with an afternoon matchup against South Carolina. And Ole Miss will host Mississippi State in a rivalry game for the nightcap at 8:30 on SEC Network.

I'm a third-year student at the University of Florida passionate about storytelling and sportswriting. My goal is to work in communications for a professional sports team after I graduate.
Previous Clinton Portis sentenced In Multimillion Dollar defrauding NFL health care scheme
Next The Jacksonville Jaguars Host The Indianapolis Colts Sunday