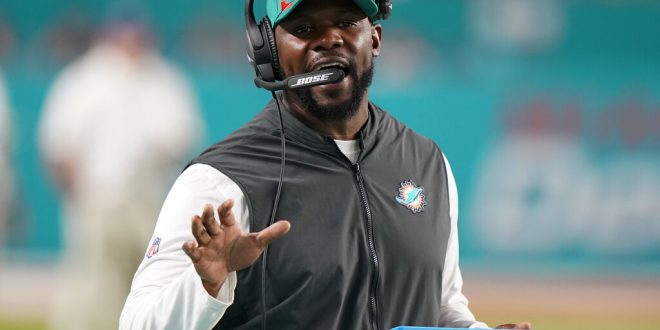 On Monday, Brian Flores was released from his job as the Miami Dolphins head coach after three seasons with the team. In his tenure, he saw a record of 24-25 with two winning seasons.

One of the most important traits for a head coach is often likeability. That goes for the fans, as well as the front office and players. Dan Graziano, an NFL insider for ESPN, says one reason Brian Flores might have been let go is the poor relationship he had with Dolphins general manager Chris Grier.

In three seasons with the Dolphins, Brian Flores saw season finishes with a 5-11 record, a 10-6 record and a 9-8 record last season. All three seasons ended without a postseason appearance.

Graziano thinks that Flores will be a coach that other NFL teams look at as an option for their head coach position going into next season. Flores’s firing came as a surprise to many, though.

Where do the Dolphins go from here?

Two major question marks about the organization are floating around the sports world: the head coach and the quarterback position.

The Dolphins were rumored with Texans quarterback Deshaun Watson and Seahawks quarterback Russell Wilson for much of last season. The rumors still remain, and Graziano thinks a big move at that position is a real possibility this offseason.

Tua Tagovailoa finished the season with a completion percentage of 67.8%. That is good enough for 7th in the league. He played in 13 games but left in the second week against Buffalo early with an injury. Counting out that game, Tagovailoa went 8-4 this season.

What will happen with the coaching job?

The Miami Dolphins is not the only team to let go of their head coach. The New York Giants, the Denver Broncos, the Minnesota Vikings and the Chicago Bears all fired their head coaches. That leaves Joe Judge, Vic Fangio, Mike Zimmer and Matt Nagy out of a job.

Jim Harbaugh, currently the head coach at the University of Michigan saw rumors to be a candidate for the Dolphins. Stephen Ross, owner of the Dolphins, is a Michigan graduate where Harbaugh is seeing success. Ross addressed this in his media availability on Monday after the firing of Brian Flores.

“That is my school I graduated from and I’m very involved in it. And I’m not going to be the person to take Jim Harbaugh from the University of Michigan,” he said.

With Jim Harbaugh being all but out of the discussion now, other candidates are popping up.

The Dolphins requested permission to speak with Brian Daboll, offensive coordinator for the Buffalo Bills. Daboll has been with the Bill since 2018 but has connections to Tua and the Dolphins. He was an assistant with Alabama during Tagovailoa’s freshman year. He also coached under Tony Sparano with the Dolphins in 2011.

The Dolphins have also requested to interview Cowboys defensive coordinator Dan Quinn. Quinn was the head coach of the Atlanta Falcons from 2015-2020 with a record of 43-42.

One last coordinator in talks among the Dolphins is the offensive coordinator of the 49ers, Mike McDaniel. McDaniel has been learning under 49ers coach Kyle Shanahan since 2005.

Nothing has been announced yet, but the Dolphins saw two straight winning seasons and two straight narrow misses from the playoffs. Whoever is named the next head coach of the Miami Dolphins will have a lot of pressure.

Jensen Young is a journalism student at the University of Florida. He works as a sports writer for WRUF.com and is the voice of trendings on Wednesday mornings on the WRUF radio station.
@Jensen_Young9
Previous Former Gators Linemen Jawaan Taylor Reflects on Year 3 With the Jaguars
Next After Eight Years with Mike Zimmer, Vikings Search for New Head Coach