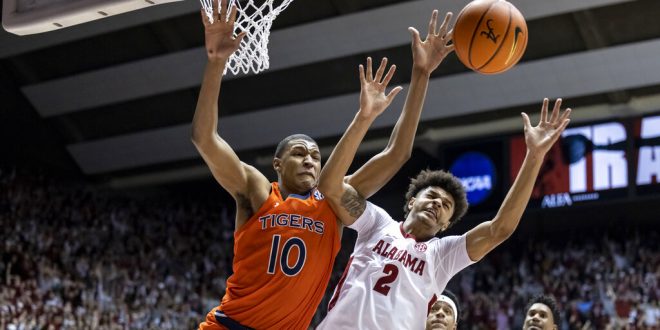 The Southeastern Conference’s men’s basketball teams saw a slew of action Tuesday; eight in-conference opponents duked it out on the court.

The Rebels fell 67-51 to the Aggies in College Station, Texas, awarding Texas A&M its seventh straight win. The Aggies sit behind the Tigers in the SEC standings.

The white and maroon held a 42-24 advantage in the paint. Forward Henry Coleman III totaled 18 points, however, he credits defensive strategy for the win.

“We knew what we had to do — to defend the ball,” Coleman said.

The No. 18 Wildcats emerged victorious 78-66 over the Commodores Tuesday.

11 straight wins over the ‘Dores. pic.twitter.com/ZUnUJWX2of

Kentucky’s resident big man, forward Oscar Tshiebwe, contributed an astounding 30 points and 13 rebounds. The last player to achieve a 30-10 game at UK was Patrick Patterson in December of 2008.

The Wildcats 12-0 run late in the first half haunted the Commodores for the rest of the game. Yet Vanderbilt’s Scotty Pipen Jr. posted 32 points throughout his 32 minutes of playing time. But the anchor fell down.

The No. 22 Volunteers glode past the Gamecocks in a 66-46 win. While the margin was only 20 points, Tennessee’s roster mopped the Thompson-Boling Arena floor.

Charleston, South Carolina, native Josiah-Jordan James secured a first-half buzzer-beater to amp up the Vols ahead of the final frame. The guard finished the night with 11 points. However, the Gamecocks were only down by six at halftime, but the all-out effort by South Carolina wasn’t enough. Tennessee guard Zakai Zeigler said no defensive matchup scares him.