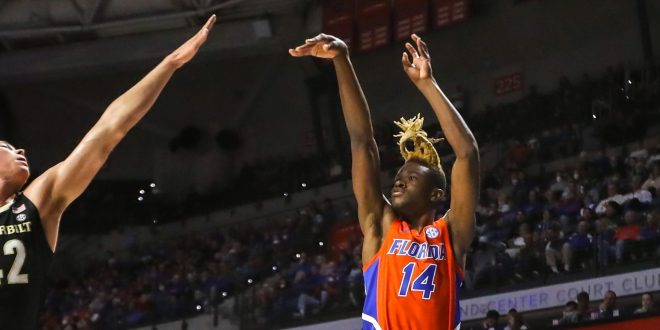 Kowacie Reeves Jr. shoots a three from the corner in a game against Vanderbilt to extend the lead for the Gators. Reeves finished with seven points, knocking down two three-pointers for the Gators in the win. Credit: @GatorsMBK Twitter Account.

The Gators Men’s Basketball team (12-6) led wire-to-wire in their 61-42 victory over the Vanderbilt Commodores (10-8). The win marked the Gators’ third straight SEC victory, giving them a 3-3 conference record after jumping out to an 0-3 start in the SEC.

Florida used a dominant second half and a relentless defensive effort to guide them to victory. The Commodores’ 42 points mark the least the Gators have given up this season.

Tyree Appleby led both teams with 11 points as the only player for both sides to score in double figures. He also chipped in for four rebounds, three assists and four steals in a well-balanced performance.

Center Jason Jitoboh had a career day, as well, scoring eight points and grabbing 10 rebounds playing for the injured Colin Castleton. The Gators out-rebounded the Commodores 42-34 playing without their veteran big man.

But where Florida really had the advantage over Vanderbilt was in turnovers. The Gators committed a season-low eight turnovers and forced twelve from the Commodores. The Orange and Blue capitalized off this advantage too, scoring 23 points off turnovers compared to the Commodores’ seven.

Florida led this one from start to finish, but Vanderbilt kept it close at times in the first half. The Gators jumped out to a 9-4 lead to start, and back-to-back threes from Kowacie Reeves and Tyree Appleby extended that lead to 15-7.

The Gators started the game playing with high effort and hustle, which led to the quick start. A perfect example came when Appleby grabbed a steal, put up a three and missed, but kept after the ball. Jitoboh grabbed the offensive rebound and dished it back to Appleby, who converted the three-pointer from the very same spot.

That play gave the Gators their largest lead of the first half at 23-13. They then went on a scoring drought that lasted nearly three minutes, and Vanderbilt went on a 6-0 run. Jordan Wright grabbed a steal for the Commodores with time running out and converted a layup at the buzzer to cut the Gators’ lead to 31-28 at halftime.

At the half, both teams split rebounds evenly with 17 apiece, and both teams had similar turnover numbers. But the Gators put up more shots, shooting 12-for-32 in the first half to the Commodores’ 10-for-23. Florida also grabbed 16 points off turnovers in the first half, while Vandy had none.

The second half was where the Gators started to pull away.

Florida Head Coach Mike White had his team ready to play out of halftime, as the Gators went on a 12-0 run to start the second half.

Jason Jitoboh opened up the scoring with a three-point play on a layup and foul, and he followed it up with another layup on the next possession for five quick points. Phlandrous Fleming Jr. then threw down an alley-oop dunk to make it seven straight points for the Gators.

Anthony Duruji scored on an athletic layup, and then Brandon McKissic splashed a three-pointer to cap off the 12-0 run and give the Gators a 43-28 lead. The Commodores would never fully recover.

The Gators outscored Vanderbilt 30-14 in the second half and shot at a 39.3% clip in the period. Myreon Jones splashed a three-pointer as time expired in the game to give Florida the resounding victory.

Listen as the Gator faithful reacted to Jones putting the finishing touches on their win.

Even though the Gators went on several scoring droughts in the second half and had another tough day from the free-throw line, the Commodores made up for it with a tough half of shooting.

Vanderbilt shot just 3-for-22 in the second half and didn’t make a single field goal in the final 10:47 of the game. Coach White told Lee Humphrey after the game that he was proud of his team’s defensive effort.

One of the key factors in holding Vanderbilt defensively was locking down their star, Scotty Pippen Jr. The Gators did just that. Pippen only logged 21 minutes in the contest after getting into foul trouble in the first half.

Even when he was playing, though, the Gators had his number defensively. He shot 1-for-10 from the field and scored only six points. His six points made for a season-low for Pippen who averaged 18.8 points per game entering the contest. His previous low was eight against VCU.

The Gators have a quick turnaround ahead of them, as they’ll play Ole Miss on Monday as a make-up game to the original contest that was scheduled in December.

Coach White said he’ll be paying attention to the result of their game against Mississippi State on Saturday.

I'm a third-year student at the University of Florida passionate about storytelling and sportswriting. My goal is to work in communications for a professional sports team after I graduate.
Previous Buchholz Bobcats Fall to Santa Fe After a Dominating First Quarter
Next Gators Women’s Basketball beats No. 11 LSU 73-72 in Thriller