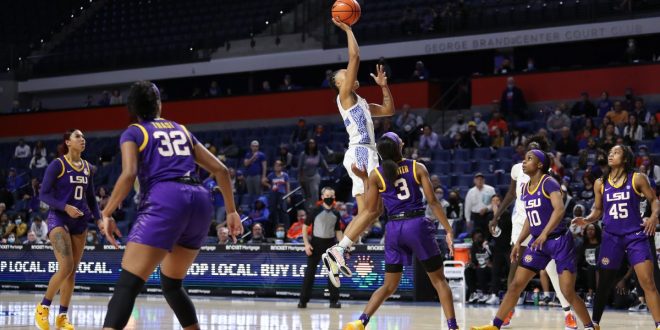 Zippy Broughton gets a big bucket to put the Gators up three with under a minute to go. The veteran played big minutes and was a huge part for the Gators success down the stretch. Credit: @GatorWBK Twitter

The Florida Gators Women’s Basketball Team (15-5, 5-2) defeats the LSU Tigers (17-3, 5-2) 73-72 in Exactech Arena in a thriller. With the win, the Gators pick up their fifth straight win, which also happens to be a fifth straight SEC win. After, beating No. 23 Kentucky in Lexington, the Gators had a lot of confidence coming into this one.

For the Gators, Kiki Smith led the way with 23 points and eight rebounds to go along with three steals playing all 40 minutes. Jordyn Merritt also played big minutes for the Gators and was effective on both ends of the floor. She finished with 16 points, 7 rebounds and four steals while going 4-6 from behind the arc.

Moving to LSU, it was the Khayla Pointer show. She was almost unstoppable scoring from everywhere on the floor. Even though she went just 1-6 from three, she finished with 35 points on 11-27 shooting and 12-15 from the free throw line.

In a game that was largely back-and-forth with no team really taking control, the Gators come out on top having now beat three ranked teams in four games. Here’s how it went down.

It was a strong defensive start by both teams out the gate as it took a little bit for buckets to start falling consistently. KiKi Smith opened the scoring for the Gators, scoring the first five points for Florida.

A Jordyn Merritt three gave the Gators a 10-4 lead at the first timeout of the game. Turnovers were a part of the story early with each team committing three in the first six minutes of the game.

A Zippy Broughton steal and score put the Gators up six with a minute to go in the first. Both teams finished with five turnovers in the first quarter as Gators would be up 16-12.

Two Broughton free throws extended the Gators to 18-12 before LSU answered with two baskets of their own. Later, Smith slices the defense scoring back-to-back buckets for the Gators.

Turnovers continued to be a big part of this game with each team recording seven of them at the halfway point in the second quarter.

Two Smith free throws extended the Gators lead by eight points with 4:53 left in the second.

Khayla Pointer recorded a big and-one for the Tigers keeping LSU within five. She is the SEC”s third leading scorer with 18.2 points a contest coming into this game and finished with 11 in the first half on 4-12 shooting.

The Tigers forced two turnovers in three defensive possessions to pull within one but an Alberte Rimdal three kept the buckets falling for Florida. A jumper by Ryann Payne and two free throws by Autumn Newby helped LSU tie the game at 33 to close out the half.

Jordyn Merritt hit a three to open up the scoring in the second half. It would be a back-and-forth quarter with both teams trading buckets throughout. The largest lead by any team during the third was LSU by five.

Alexis Morris picked up her third foul of the game forcing her to go to the bench with 8:30 left in the third.

Pointer then hits a shot putting the Tigers up 37-36 for their first lead since they opened the game 2-0. A bucket by Smith followed by two for Faustine Aifuwa and the Tigers go up 41-38. Aiufwa finished with six points and five rebounds for the Tigers.

A drive to the basket by Pointer and the Tigers go up five only for Merritt to respond with another three.

With Just under five to go, LSU’s Jailin Cherry fouled KiKi Smith going in for a layup. Cherry didn’t like the call, expressing this to the officials which led to a technical foul. Smith hit one of two and Rimdal hit one as well as the Gators tied it with 4:47 left in the third.

Getting into the bonus, Taliyah Wyche knocked down two free throws after the Gators forced another turnover. However, LSU continued to stay in the game getting timely offensive rebounds and second chance points.

Nonetheless, Smith continued to be the star for the Gators making plays like this.

Despite this, Pointer continues to be the catalyst for LSU as she scores eight straight points for LSU as the Tigers led by four at the end of the third.

Smith would open up the scoring with two free throws and then force a steal and score. Some more back-and-forth and this game was all tied up with just over seven to go. However, the Gators regained the lead on a Taliyah Wyche layup off a dish from Smith.

Turnovers continued to play a role down the stretch as neither team was able to get a consistent run going without being able to take care of the ball. Four straight points by Kiki Smith and the Gators led by one with under three to go and it was a thrilling three minutes.

LSU would get the ball to their best player as Pointer would hit a running layup to push the Tigers back up by one with 2:50 remaining.

After a Pointer turnover and a Nina Rickards steal and score, the Gators would retake the lead.

With a minute left in the game, Broughton hits a clutch jumper to put the Gators up 70-67. The Tigers got two good looks to tie the game but it would be Pointer and Morris that couldn’t knock either of them down.

Smith swooped in for the rebound and would hit 1 of 2 free throws to put the Gators up four. Despite a Pointer three at the buzzer, it didn’t matter as the Gators were up four and win the game 73-72. Check out the rest of the game stats right here.

Following their fifth straight win and moving to fourth in the SEC, the Gators will face three straight ranked opponents.

First up though, Kelly Rae Finley’s squad will take on No. 1 South Carolina at home next week. After this impressive stretch of games, the Orange and Blue will go into the week with a shot to enter the AP Top 25.