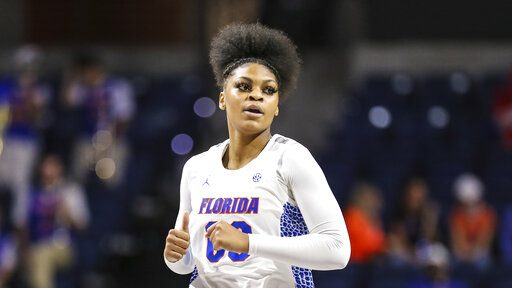 Florida forward Taliyah Wyche (00) during the second half of an NCAA basketball game against Florida State on Sunday, Dec. 12, 2021 in Gainesville, Fla. (AP Photo/Gary McCullough)

Back in July, Gators women’s basketball coach Kelly Rae Finley entered a difficult situation. Former head coach Cameron Newbauer resigned on July 16 and an article in September detailed abuse from the former head coach on his players during his four year tenure at UF. The program was facing adversity and Finley was promoted to interim head coach in July. But since taking over, the program has shined.

Despite a rough start, the Gators have emerged as one of the best teams in the SEC. The team is 15-5 (5-2 SEC) and is currently on a five game winning streak. The team has three ranked SEC wins, with two of those coming on the road. Sunday, the Gators upset the 10th ranked LSU Tigers at home for the team’s biggest win so far this season. Finley has done a tremendous job so far this season and hopes of becoming head coach may turn into a reality soon.

The team averages almost 70 points per game and the team shoots 41% from the field and 31% from three-point range. Finley said that the team is an amazing group to coach

This Sunday, Finley and the Gators face their toughest test of the season, taking on the number one-ranked South Carolina Gamecocks. The Gamecocks sit at second in the SEC standings, behind the Tennessee Volunteers who are 7-0 in conference play.

The Gamecocks have eight wins over ranked teams this season, defeating usual powerhouses UCONN, NC State, Maryland, Stanford and LSU. The team is led offensively and defensively by Aliyah Boston, who averages a double-double with 16.9 points per game and 11.4 rebounds per game. Boston also averages 3.1 blocks per game.

Finley praised the Gamecock program and is aware of the threat they pose to any team that hits the court with them. However, she understands that every team has their weaknesses and is confident the Gators can compete with the top team in the country.

“Obviously Aliyah Boston is strong on the inside,” Finley said. “We feel like we have a very strong four post rotation that can give her a lot of different looks. Their guard is very strong, but they do tend to turn the ball over quite a bit. They do love those inside shots and that’s where their strength lies.”