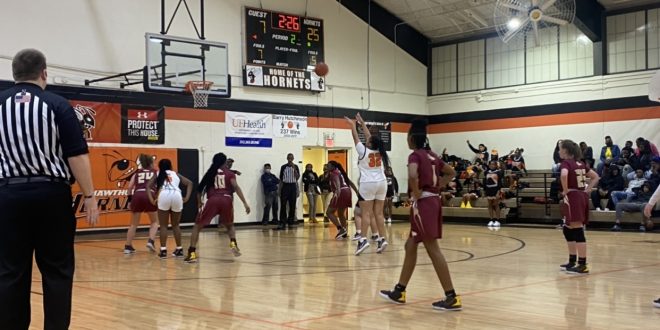 The Hawthorne Hornet Girls Varsity Basketball Team warming up for their game against The North Marion Colts at 7:00PM. Stay tuned for updates throughout the game. @HawthorneHoops pic.twitter.com/lit98GRebZ

Before the game, Hawthorne coach Cornelius Ingram addressed the team who were missing two of their starting players for this game.

Both the Hornets and the Colts came in with the same energy to start the first quarter. To begin the game, the Colts scored first, off of a free throw putting them ahead  but shortly after, Saideriel Oliver went in confidently for a layup to get the Hornets in the game. This shot was just what the team needed to get started.

Immediately after Lakijah Brown and Kentavia Hagins both shot three-pointers within 20 seconds of each other, putting the Hornets up 8-1.  With 2:40 left of the first quarter the Hornets had a strong offense and Brown hit another 3-point shot for the team.

Opening the second quarter of the game, De’ Mya Adams drained a 3-point shot, keeping up the energy from the first quarter. The Colts tried to keep up offensively but as the quarter continued to wind down, the Colts could not hit shots and the Hornets blew away to a 34-9 halftime lead.

With high energy throughout the entire half, The Hawthorne Hornets lead the game with a score of 34-9 at halftime! @HawthorneHoops

Fight in the Third Quarter

After a solid first half for the Hornets, the Colts seemed to come in with a whole new energy in the second half. They immediately scored a 3-point shot, showing the Hornets they still had some fight in them but the Hornets regained momentum, as Lakijah Brown hit a three and Rhamani Sheppard-Rentz scored on a layup for the Hornets.

In the fourth quarter the Colts tried to make the game competitive and they did manage to cut into the lead but players like De’ Mya Adams and Kentavia Hagins hit key free throws down the stretch for the Hornets, allowing them to put up the 52-37 final score.

With the regular season coming to an end, the Hornets prepare for postseason play and the upcoming district tournament.  Senior Saideriel Oliver talks about what she thinks would work best for the team in order to keep the momentum going forward.

Coach Ingram also reflects on the regular season and is confident moving forward to districts.

“The young girls have been stepping up, we have been able to hit shots from the perimeter, we have been finishing well and playing great defense. I am very pleased the way we ended the season.”

The Hawthorne Hornets will be playing the Fort Meade Miners at home this upcoming Tuesday, in district tournament action.