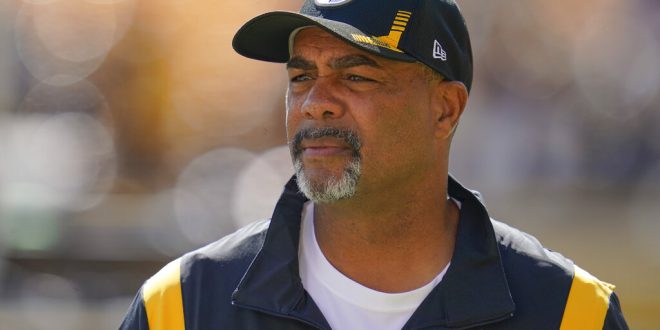 FILE - Pittsburgh Steelers senior defensive assistant coach Teryl Austin watches the team warm up before an NFL football game against the Cincinnati Bengals, Sunday, Sept. 26, 2021, in Pittsburgh. Teryl Austin has been where Brian Flores currently is many times. Eleven to be exact. That's the number of head coaching interviews the Pittsburgh Steelers senior defensive assistant has had through the years, some of which made Austin feel as if he was only there to check a box. (AP Photo/Gene J. Puskar, File)

Teryl Austin started his football career at the University of Pittsburgh as a safety in 1984 and played until 1987. During this time, he won four athletic letters and started for three of the season that he played. Austin then went on to play in the World League of the American Football in 1991, playing for the Montreal Machine.

After his collegiate coaching career Austin went on to begin his NFL career in 2003. Austin began his NFL career with the Seattle Seahawks as he continued to coach defensive back. The team had great success with him, making a Super Bowl appearance in 2005. Austin then went on to coach for the Arizona Cardinals in 2007 where the Cardinals had one of their most successful seasons and first championship game appearance since 1947 for the team.

Austin took a break between his NFL coaching career to return to collegiate coaching in 2010. He was hired as the University of Florida’s defensive coordinator. During his season with the Gators, he also coached the Gators cornerbacks, and the team finished 8-5 overall and a victory in the Outback Bowl.

His NFL break didn’t last long as he was hired as secondary coach for the Baltimore Ravens in 2011. During his time coaching the Ravens, the team did well and defended more passes than any other NFL team. In 2012, the Ravens won the Super Bowl. Austin was then hired by the Detroit Lions in 2014 as defensive coordinator. He stayed with the team until 2017.

In 2018, he was hired by the Cincinnati Bengals as defensive coordinators where he stayed there for a year.

In 2019, he was hired by the Pittsburgh Steelers as secondary coach and senior defensive assistant coach. Austin’s coaching helped make Pittsburgh’s defense rank as one of the best in the NFL in 2020.

Austin continues to coach for the Steelers until present day where the Steelers decided to stay within their organization and have named him their new defensive coordinator. He is replacing Keith Butler who is retiring this offseason after 19 years with the club.

Previous Is the Big 3 Dynasty Over in LA?
Next Will Florida Women’s Basketball Make NCAA Tournament?