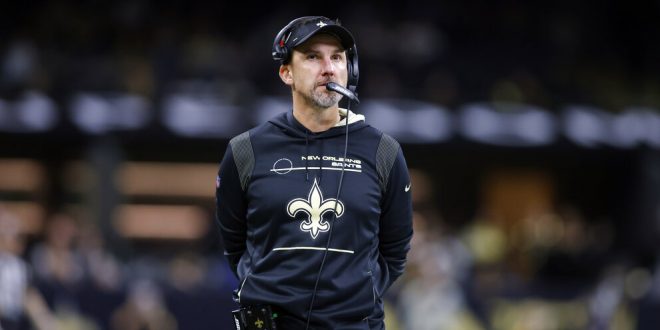 After Sean Payton’s 16-year tenure as head coach, the New Orleans Saints are hiring defensive coordinator Dennis Allen, per reports. While the Saints have not officially announced Payton’s replacement, two people familiar with the decision spoke to The Associated Press anonymously.

Dennis Allen as a Familiar Face

Allen has been with the Saints as defensive coordinator since 2015. He was deemed a front-runner for the position from the beginning, as he has worked under Payton for 12 out of the coach’s 16 seasons with the Saints.

Notably this past season, Allen took over as acting head coach for the team’s Week 15 game against the Tampa Bay Buccaneers, after Payton was sidelined with COVID-19. The Saints shutout the Buccaneers 9-0 under Allen.

Because of his time with the Saints, Allen has a lot of familiarity with the building, said ESPN sports reporter Jeff Darlington.

Allen had an edge in the hiring process because he has been so successful as defensive coordinator. The Saints rank fourth in the NFL in both yards and points allowed over the past three seasons, according to ESPN Stats & Information research.

Because he has been with the Saints for a majority of his career, he’s familiar with the team and its culture. Therefore, the transition to head coach should be smooth.

On Dennis Allen: "First of all he’s a great coach and he’s been a part of our building for a long time. … He’s been part of building the culture and a big part of the success we’ve had over the years, and he’s got experience as a head coach as well."

Also, he has previous NFL coaching experience as the head coach of the Oakland Raiders from 2012-2013.