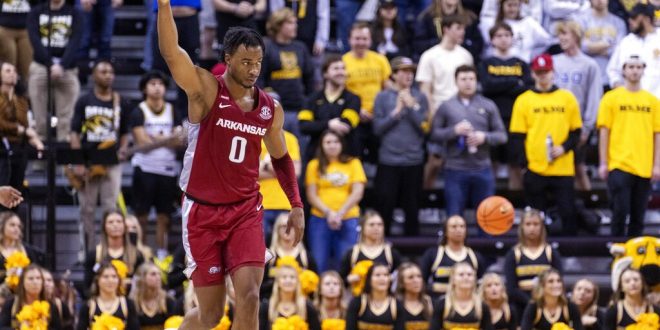 Arkansas rolls to a 19-point win

Head coach Eric Musselman’s “Muss Bus” looked to have run out of gas when Arkansas ended a nine-game win streak after losing to Alabama by one point on Feb. 12. A quick stop to refuel, and the “Muss Bus” was back on track as the Razorbacks dominated Missouri 76-57 to get back into the win column. Guard Stanley Umude scored 23 points including six three-pointers to lead the Razorbacks (20-6, 9-4 Southeastern Conference) to their 10th win in 11 games.

The shots fell consistently for Arkansas as five players scored in double figures. Additionally, two players posted a double-double in points and rebounds.

In his 23-point performance, Umude shot 8-for-13 and added two blocks on the defensive end. Additionally, Jaylin Williams scored 12 points on 5-of-7 shooting with 11 rebounds, his 8th double-double in 12 games.

Forward Trey Wade struggled in recent games after only scoring 11 total points in the last five games, including three games with zero points. However, he rebounded on Tuesday night with 12 points and 11 rebounds, his fourth career double-double.

JD Notae added 17 points including three three-pointers and added two steals on the defensive end. In 25 games played, Notae has still yet to score less than 10 points and averages 18.8 points per game.

Mizzou can’t get shots to fall

Javon Pickett led the Tigers with 13 points on 5-of-12 shooting, while DaJuan Gordon scored 11 points with three three-pointers.

Removing Pickett and Gordan, Missouri shot 13-of-39 from the field and 1-of-11 from deep.

Missouri looks to get back on track in back-to-back games against Mississippi State, with the first game on Friday, Feb. 18 at 7 p.m. and the second on Feb. 20 at 8 p.m.

Meanwhile, Arkansas faces a tough five-game stretch to conclude the regular season with three games against ranked teams. First, the Razorbacks begin the challenge at home against No. 16 Tennessee on Saturday, Feb. 19 at 4 p.m. on ESPN before hosting Florida, who lost to Texas A&M, on Tuesday, on Feb. 22. 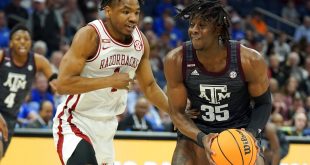 Arkansas Set for First Round Test Against Vermont