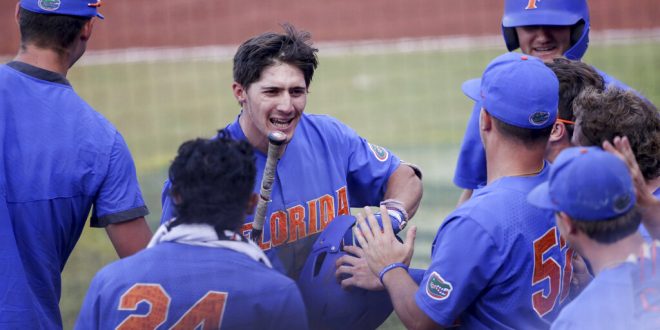 Florida outfielder Jacob Young (1) celebrates with teammates after hitting a homer against Alabama in the sixth inning of an NCAA college baseball game during the Southeastern Conference tournament in Hoover, Ala. Thursday, May 27, 2021. (AP Photo/Butch Dill)

Barco made 16 appearances last year for the Florida Gators.  He finished with a 10-3 record and a 4.01 ERA across 83 innings pitched.

He was ranked No. 7 (No. 3 pitcher) on Baseball America’s Preseason Top 150 players list, is a 2022 MLB Draft Prospect and made the 2021 USA Baseball Collegiate National Team.

The top pitchers in our brand new College Top 150?

They were the No. 1 seed going into the regional tournament. However, Southern Alabama sent them home from the tournament after a 19-1 blowout.

Barco said the freshmen watched that game and it’s important looking forward to this coming season. It is a big motivator to not lose focus coming into this year.

He said the team got “over our heads” with the season they had coming out of 2020 (where they went 16-1). Additionally, it is important for the team to play it game-by-game.

Barco will be the starter Friday and the ace this season for the preseason ranked No. 6 Florida Gators.

He said this off season he worked on consistency with his pitches and being able to locate pitches when he wants to. That’s what helped him get into the Friday pitching role.

He talked about stepping into his role as the ace.

The gators have a young pitching with nine on the roster. Barco said he has taken the new guys under his wing. He added that the older players have done a great job showing the new guys around and what UF baseball is about.

He said he is excited about the talent of the new pitchers and is ready to see what they can do this season.

The Gators will start on the diamond Friday at 7 p.m. versus Liberty. This will be Barco’s 22nd appearance for the Gators.

Previous Mississippi State and Alabama set to Face-Off in Tuscaloosa
Next No. 2 Auburn Host Vanderbilt