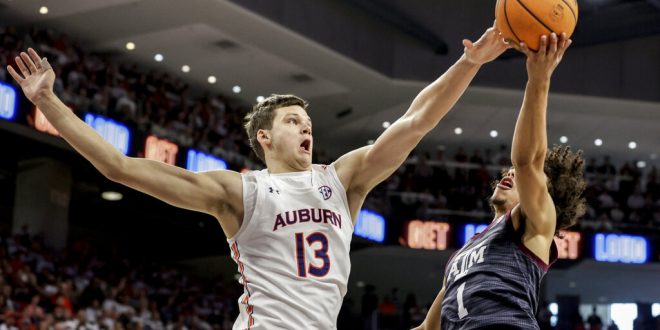 Auburn forward Walker Kessler (13) blocks a shot by Texas A&M guard Marcus Williams (1) during the first half of an NCAA college basketball game Saturday, Feb. 12, 2022, in Auburn, Ala. Kessler had a triple-double with 12 blocked shots, 12 points and 11 rebounds and No. 1 Auburn bounced back from a loss with a 75-58 victory over Texas A&M. (AP Photo/Butch Dill)

The No. 2 ranked Auburn Tigers host Vanderbilt at 9 p.m. on Wednesday.

This is the first meeting between the teams.

Auburn has an overall record of 23-2 this season. In conference play, the Tigers are 11-1.

Auburn lost to the UConn Huskies in double overtime in its fourth game of the year. The Tigers would then win their next 19 games. Last week, Auburn lost to Arkansas by four in overtime. The loss was the Tigers’ first in SEC play.

Auburn bounced back on Saturday by beating Texas A&M by 17 points. Forward Walker Kessler led the way with 12 points, 12 blocks and 11 rebounds.

Kessler now has two triple-doubles this season. He is one of two players in Auburn history to ever record a triple-double. Kessler is the only player with two.

Freshman Jabari Smith leads the Tigers in scoring with 15.2 points per game this season. The forward has opened the eyes of many NBA prospects and is projected to be a top pick in this year’s draft.

Vanderbilt has had an up-and-down season. The Commodores are 13-11 this season. The team is 5-7 in conference play.

Vanderbilt has struggled to build consistency this year. Winning streaks are followed by equally as long losing streaks.

Against ranked teams, the Commodores are 1-4. Wednesday’s matchup against Auburn could bring trouble as their lone ranked-win came at home.

Vanderbilt is led by guard Scottie Pippen Jr. He leads the team in points (18.9), assists (3.8) and steals (1.8) per game this season. Pippen was voted as the SEC Preseason Player of the Year.

Trey is a third year sports media major at the University of Florida, and a WRUF reporter.
@@treyboogie5
Previous Hunter Barco Talks 2022 Baseball Season
Next DeLisha Milton – Jones Enters the Hall of Fame 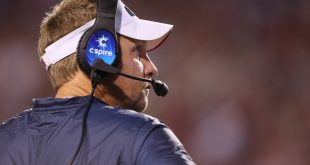