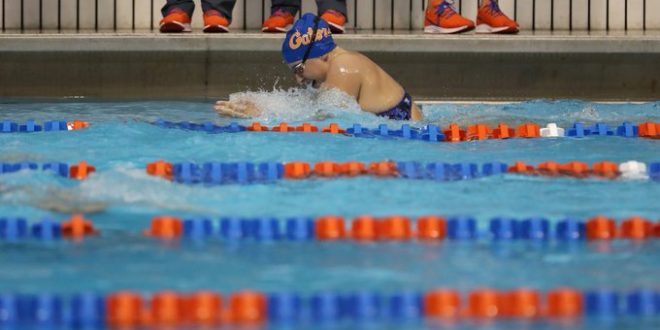 The Florida Gators men’s and women’s swimming and diving teams enter the third day of the SEC Championships Thursday in Knoxville, Tennessee. The men sit in first place, and the women are slated fifth after the second day of competition.

Three Medals for the Men

The Gators men’s team had a huge jump in standings after day two of competition. The Gators landed in first with 497 points coming off of a 133-point sixth place standing on the first day. Florida has a comfortable 137-point cushion over second place Texas A&M.

The men’s 200 free relay struck gold with a team of Adam Chaney, Eric Friese, Kiernan Smith and Macguire McDuff. The relay posted a record A-cut time of 1:15.18 in the event, the fourth-fastest time in program history. The time was also the fastest in the nation this season, an SEC meet record and a pool record.

That wasn’t the only event Smith and Chaney had podium finishes in. Smith boasted a silver medal after a stellar 4:10.15 500 free A-cut swim. Chaney earned bronze in the 50 free with a swift 18.81 A-cut finish, his first individual medal of the championships.

Gators Women Move Up to Fifth

The Florida women’s team had a two-standing jump from seventh to fifth when day two of competition closed out. The Gators finished with 287 points on the day.

The 200 free relay team of Talia Bates, Katie Mack, Ekaterina Nikonova and Micayla Cronk hit the wall with an A-cut 1:28.15 time, which tied the fifth-fastest swim in program history.

The 500 free featured strong finishes from Tylor Mathieu and Elise Bauer. Mathieu had a four-place finish with 4:39.51, and Bauer was right on her tail in fifth with a 4:40.82. Both finishes were B-cut qualifying times.

In the women’s 50 free, Bates recorded a 22.01 in the B-Final that landed her first in the final and ninth overall. Mack also swam the event with a 22.34 finish to place fifth in the B-Final.

Competition continues for the Gators in these SEC Championships until Saturday.

Kaitlyn Wadulack is a third-year journalism student specializing in sports and media at the University of Florida. You can reach Kaitlyn at k.wadulack@ufl.edu
Previous Eason, LSU Tigers take down Georgia Bulldogs
Next NBA commissioner Adam Silver talks league innovation