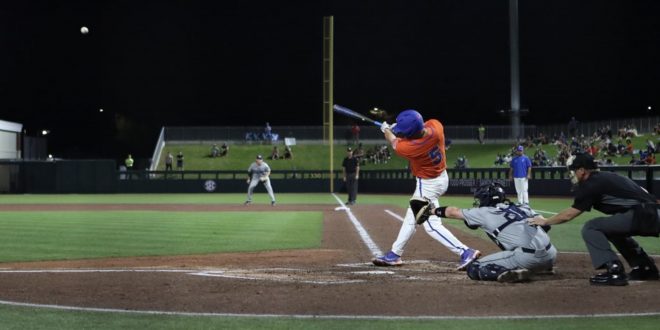 Florida Gators Colby Halter (5) hits a home run to center field to score two runs in a game against the University of North Florida on Feb 23. 2022. (Photo by Anna Carrington, Floridagators.com)

The Florida Gator baseball team improves to 3-2 in the 2022 season after beating UNF 3-1 with help from a two-run home run from Colby Halter.

Wednesday night’s matchup started slowly from both sides and neither team got into a strong rhythm offensively. Pitching dominated the contest as each offense struggled to put up runs.  UNF had eight hits while the Gators managed just six.

Sophomore pitcher Brandon Sproat started on the mound for the Gators. In the first inning, he hit the leadoff UNF hitter and went on to finish the inning striking out two hitters and not allowing a run.

The Gators saw similar struggles in the first. Three Gators saw the plate and three were sent back via flyouts.

Sproat continued striking out UNF hitters with one more and also allowing a hit to Cade Westbrook who then got caught stealing.

Florida was able to score in the second with a methodical approach. Wyatt Langford walked and advanced to second on a wild pitch. Catcher BT Riopelle grounded out, but was able to advance Langford to third base. Redshirt freshman Tucker Talbott plated a run with an RBI groundout.

Sproat put together another quality inning of pitching in the third. He struck out his fourth batter and retired UNF in order.

Kendrick Calilao started the third inning strong with a double to left field that was inches away from being a home run. Deric Fabian executed a sac-bunt and moved Calilao to third base. Colby Halter stepped up to the plate and rocketed a two run home run to center field, making the score 3-0 in favor of the Gators.  This would turn out to be the final runs the Gators would score in the game.

Halter knew the ball was going out of the park, despite the long distance it had to travel.

After the homer from Halter, UNF head coach Tim Parenton brought in a new pitcher after Darin Kilfoyl gave up three runs in 2.1 innings.

The fourth inning came and went quickly for both sides. The Ospreys went down with two strikeouts and a groundout.

The Gators had an opportunity for another big inning with Riopelle hitting a double but he was thrown out trying to stretch the hit into a triple.  That would prove costly as Talbott followed Riopelle’s it up with a single of his own, which might have plated Riopelle.  Kris Armstrong ended the inning by grounding into a double play.

UNF put up a score in the fifth inning because of three hits and a walk. The Ospreys started the inning with three straight singles. It looked as though Sproat would wiggle out of trouble after striking out two hitters but he gave up a walk to Aidan Sweatt which brought in the game’s only run for the Ospreys.

Brandon Sproat hit the bench after the fifth inning and Blake Purnell and Ryan Slater finished out the game on the mound for the Gators with Slater getting his second save.

Sproat talked about the youth in the Florida pitching staff, including Purnell and Slater.

Gator coach Kevin O’Sullivan described the ups and downs his team will face over the season. He believes that the offense will improve.

Next, the Gators host Georgia State in a three-game series starting on Friday, February 25th.

Jensen Young is a journalism student at the University of Florida. He works as a sports writer for WRUF.com and is the voice of trendings on Wednesday mornings on the WRUF radio station.
@Jensen_Young9
Previous LSU visits No. 6 Kentucky Basketball
Next Gator Softball Shuts Out North Florida