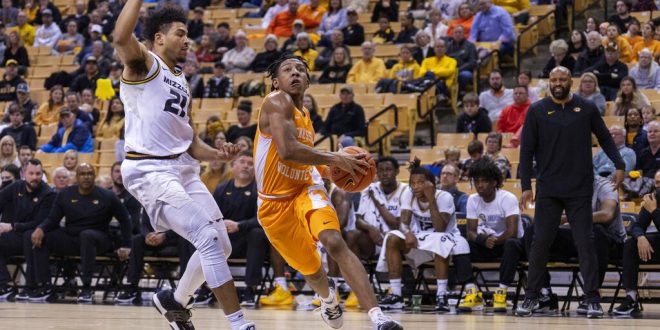 This weekend’s matchup is truly a battle of SEC heavyweights. Auburn is the No. 1 team in the SEC and owned the No. 1 ranking in the country for a period this season. Tennessee is tied for third in the SEC and only two games behind Auburn in the conference standings.

Both Tennessee and Auburn have been extraordinary at defending home court this season. Auburn faces the challenge of traveling to take on a Tennessee team that is 14-0 in Knoxville this year. The Volunteers are a different team at home compared to on the road. As when on the road they are just 5-5 on the season.

The home-court advantage seems to be playing a big part in the predictions of who will win this game. ESPN currently is giving Tennessee a 72.4% chance to win. Auburn is the higher-ranked team but Tennessee is favored to win. Auburn coming in on the road and their losses this month are the reason for these odds.

Before February, Auburn was 20-1 and ranked the number 1 team in the country. On Feb. 8, Arkansas handed Auburn their first loss in 19 games. Auburn was on the road in this matchup and lost in overtime. Then, on Feb. 19, Florida upset Auburn by one, handing them another road loss.

Auburn has lost two of its last five. The Tigers are still the No. 3 team in the nation with only three losses on the year. They have a very talented team and have had a great season. These losses don’t mean Auburn is collapsing. It just proves that they can be beaten. Matching up against a Volunteer team that is undefeated at home is not good for an Auburn team that has lost its last two road games.

The Auburn Tigers are led by freshman forward Jabari Smith. Smith is averaging 16.2 points per game and shooting 42.5% from three on the season. He has taken college basketball by storm and is projected to go in the high lottery in the NBA Draft this June. Smith is hot coming into this weekend matchup. In his last three games, he is averaging 24.6 points per game. Tennessee will need to find a way to slow him down if they are going to defend home court.

Freshman Guard Kennedy Chandler runs the show for the Volunteers. Chandler was the top-rated point guard in the 2021 class coming out of high school and has produced at Tennessee. He is averaging 13.6 points per game and 4.8 assists per game on the season. Chandler had 23 points in the Volunteers’ last matchup against Missouri.

Will Kennedy Chandler and the Volunteers be able to defend home court? Or will Jabari Smith and the Tigers end their losing streak on the road? Find out Saturday at 4 p.m.