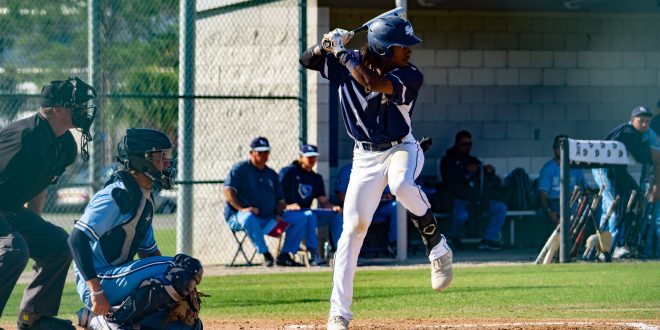 Santa Fe baseball had the bats popping Wednesday with a season-high 19 runs against the State College of Florida Manatees.

The Saints started the game quietly with only one run until the bottom of the fourth.

A three-run homer by Santiago Garavito would change the tide and help the Saint’s offense explode for nine runs in the inning. Then, in the fifth inning, the Saints continued to pile on with two runs batted in by centerfielder Zeb Marquis.

In the sixth, the Manatees answered back with five runs of their own but never could match the Saints bats. Then, in the same inning, the Saints would put up four more runs. The Saints would hold on to their momentum, putting up another three runs in the bottom of the eighth.

The game concluded after the eighth inning with a final score of 19-7, with the Saints ending the night with 16 hits.

The bats exploded for the @santafesaints today in a 19-7 win pic.twitter.com/of9HRtVlJP

The Saints set a new season-high for hits with 16 and runs with 19. Ten different Saints recorded a hit in Wednesday’s contest.

Jevin Relaford, Santiago Garavito, and Gabriel Esquivel led the Saints with three hits apiece and had a combined five RBIs.

Santiago Garavito had Santa Fe’s only home run of the day.

The Saints improve to 12-9 and hope to keep this momentum into conference play. The Saints play their first Mid-Florida Conference game at home against the College of Central Florida, March 5th at 1 pm.

Previous Fabian, Milchin Shine As Gator Baseball Routs FAMU
Next Herro’s 30 Points Not Enough as Bucks Take Down the Heat

After a loss to Texas A&M on Thursday, Gators baseball beat Arkansas 7-5  to stay …