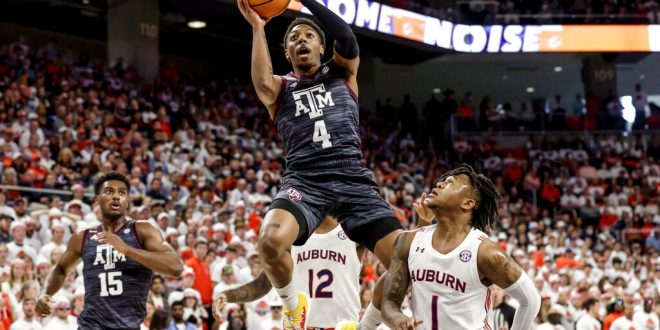 Texas A&M guard Wade Taylor IV (4) goes up for a lay-up as Auburn guard Wendell Green Jr. (1) defends during the first half of an NCAA college basketball game Saturday, Feb. 12, 2022, in Auburn, Ala. (AP Photo/Butch Dill)

The Texas A&M Aggies continued their winning streak in dominant fashion against the 25th ranked Alabama Crimson Tide on Wednesday. Breakout star Quenton Jackson was the game’s top scorer with 28 points on 9 of 13 from the field. The Aggies made the most of their trips to the foul line, shooting 93.3% with Jackson going a perfect 9 for 9.  Jackson also averages 14.4 points per game for the season. During the Aggies’ three game-winning streak Jackson has a total of 70 points and is averaging 23.3 points per game.

Guard play was definitely a contributing factor for the Aggies’ huge win against a ranked SEC opponent. Guard Tyrece Radford who averages 10.4 points per game this season contributed with a productive 22 points and eight rebounds. Additionally, Texas A&M owned the glass, out rebounding Alabama 33 to 24. Sophomore Forward Henry Coleman III turned in a double-double with 18 points and 11 rebounds setting the tone in the paint.

The season signature win for the Aggies is the largest margin of victory against Alabama. Texas A&M is now 6-4 in the last 10 meetings against Alabama winning the last for matchups.

At home this season, the Aggies are 12-4 and have an overall record of 19-11. Texas A&M looks to wrap up the regular season Saturday, March 5 at home against the Mississippi State Bulldogs.

Alabama suffered their 11th loss of the season in their final home game against an unranked rival SEC opponent. The Crimson Tide had no answers for the Texas A&M Aggies in the embarrassing upset loss on Wednesday.

The Crimson Tide’s 19 turnovers resulted in 29 points for the Aggies and became the deciding factor in the blowout loss. Alabama shot an abysmal 8 for 24 from beyond the arc on 33.3% shooting from the field.  The shocking loss brings Alabama’s home record to 13-3 this season and 9-8 in SEC conference play.

Alabama looks to bounce back Saturday, March 5th away against SEC opponent LSU.