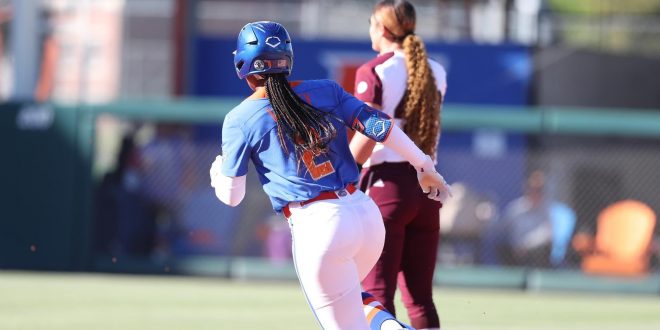 Gators close out series against Texas A&M with an 11-3 victory. (Photo by Emma Bissell via floridagators.com)

After splitting the first two games of the weekend series against Texas A&M, Cheyenne Lindsey and the Gator softball team caught fire to win the third game 11-3. That is just the sixth time the Gators have scored in double-digits this season.

Cheyenne Lindsey and the Gators pour on runs

The fifth-ranked Gators and the Aggies shared a run each in the first inning, but neither team was able to fully open up the scoring for the first three innings. The Gators entered the fourth down 2-1 when they found what their bats had to offer.

The scoring started with Cheyenne Lindsey hitting a home run, bringing in three runs. This put the Gators in the lead 4-2, a lead that would not be given back to the Aggies. The scoring would not stop at three for the Gators in the fourth inning. Catcher Sam Roe doubled and brought in Avery Goelz. Kendra Falby got the last RBI of the fourth reaching on a fielder’s choice that saw Roe cross home plate.

Florida went on to win 11-3, highlighted by a three-run homer, courtesy of Reagan Walsh, in the bottom of the sixth inning.

Despite giving up a season-high eight hits, Gator pitcher Elizabeth Hightower recorded her eighth win on the season.

Looking ahead for the Gators

The Gators are now 25-3 on the season, the same record they had at this point last season. Next, the Gators take on Stetson on Tuesday and Wednesday. In the 15 games played between the two programs, Florida holds a 12-3 record. The last time they met, the Gators won 14-0.

Jensen Young is a journalism student at the University of Florida. He works as a sports writer for WRUF.com and is the voice of trendings on Wednesday mornings on the WRUF radio station.
@Jensen_Young9
Previous Ferrari get commanding win at the 2022 Bahrain Grand Prix
Next Florida Baseball Falls Short To Alabama In Series Finale 8-7