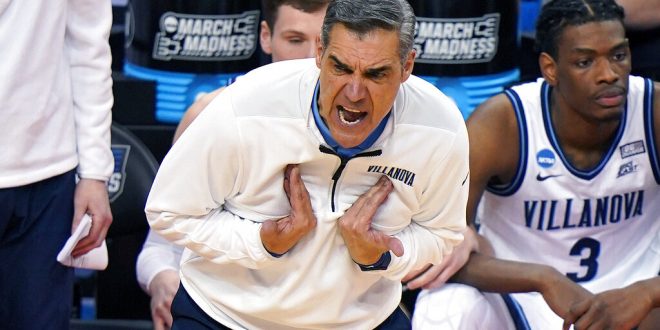 Villanova head coach Jay Wright express himself to an official during the second half of a college basketball game against Ohio State in the second round of the NCAA tournament in Pittsburgh, Sunday, March 20, 2022. Villanova won 71-61. (AP Photo/Gene J. Puskar)

Yet, two rounds later, here they are. The Wolverines evaded a play-in game and beat No. 6 seed Colorado State and No. 3 seed Tennessee. Through the 76-68 victory over the Volunteers, Michigan made its fifth straight Sweet Sixteen. It’s the fifth team to achieve such a feat since 1985.

(ALSO: Michigan head coach Juwan Taylor got some good-press when he consoled an emotional Kennedy Chandler)

However, Villanova head coach Jay Wright has not forgotten that Michigan was a top-10 team at the beginning of the season.

The Wildcats had a strong season that included a 71-53 victory over common opponent Tennessee. However, they struggled when facing top-tier competition back in December. Knocked-out No. 1 seed Baylor beat a road Villanova 57-36. In the Wildcats’ next game, they lost handily to Creighton. A few weeks later, on Jan. 5, they took revenge toppling Creighton 75-41.

Villanova closed out the season by winning the Big East Tournament.

While Wright doesn’t think his team is playing looser as it enters the Sweet 16, he does notice a difference. The Wildcats glided past Delaware and defeated Ohio State 71-61; now, his team possesses more confidence.

What’s on the Line?

The winner earns a ticket to the Elite 8 against the No. 1 seed Arizona-No. 5 seed Houston winner on Saturday.

Moreover, if Villanova wins, the odds will be in its favor for the rest of the tournament.

The game will broadcast live at 7:29 p.m. on TBS and stream via NCAA.com.