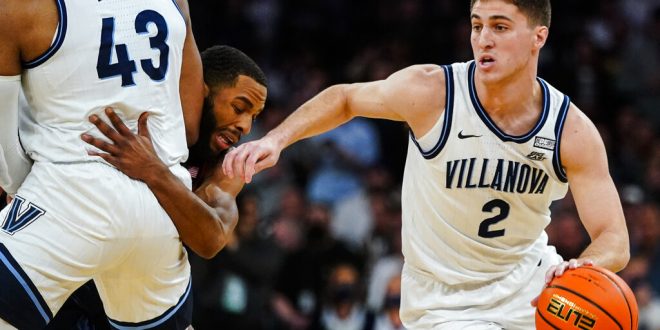 Villanova's Collin Gillespie (2) uses a screen by Eric Dixon (43) as Connecticut's R.J. Cole defends during the first half of an NCAA college basketball game in the semifinals of the Big East men's tournament Friday, March 11, 2022, in New York. (AP Photo/Frank Franklin II)

No. 3 Villanova Defeats No. 11 Michigan, Advances to Elite 8

The Villanova Wildcats defeated the Michigan Wolverines, 63-55, in the Sweet 16 on Thursday, Mar. 24. The game was a rematch of the 2018 National Championship.

Led by senior guard Collin Gillespie and Head Coach Jay Wright, Villanova is headed back to the Elite Eight for the first time since 2018. There, they will face the Houston Cougars.

Villanova can feel the #Elite8 pic.twitter.com/oHW96sd5vc

After an underwhelming regular season, Michigan had a strong tournament performance.

Thus ends just about the strangest Michigan basketball season I can remember. Packing more unpredictable highs and lows for the team and fans than any I've seen — on and off the court. The Sweet 16 was the unexpected highlight.

Villanova has excelled in this year’s tournament relying on the same qualities that won them championships in 2015 and 2018. Specifically, they have utilized elite shooting, defense and veteran leadership. Currently, Villanova’s team free throw percentage of 82.61% is the highest in Men’s Division 1 Basketball history.

Villanova starting this game out with a missed free throw feels like a sign — this team is on pace to break the NCAA record for highest single season FT% at 82.6% coming into tonight

They only missed one more the rest of the game.

Additionally, their three opponents have not scored more than 61 points. As a result, Villanova is yet to trail in the 2nd half of any of their games. Lastly, seniors Jermaine Samuels and the aforementioned Collin Gillespie were on the 2018 title team. They game manage and protect the ball, ultimately running an offense that doesn’t make mistakes.

Villanova's Collin Gillespie has played a total of 206 minutes in the NCAA Tournament during his career. He has six turnovers during that span.

That's one turnover every 34.3 minutes.

Michigan had a disappointing regular season. They finished with a record of 17-14 and lost to Indiana in their first game of the Big Ten postseason tournament. During their struggles, many were quick to pile on.

Consequently, Michigan entered the tournament angry and ready to make some noise. In the brackets opening game, they defeated Colorado State 75-63. Then, in the Round of 32, they upset Tennessee.

In all, Michigan had a very rocky year. At the climax, their Head Coach, Juwan Howard, was suspended for the remainder of the regular season after an altercation with Wisconsin’s head coach. Nonetheless, they ended the year strong and built momentum for next season.

Villanova will take on Houston in the Elite Eight. The game is scheduled for Saturday, Mar. 26, and will start at 6:09 p.m. It will air on TBS, and the winner moves on to the Final Four.

William Silverman is a junior at the University of Florida from Philadelphia who is interested in pursuing a career in business, communications and journalism.
Previous Sweet 16: Michigan vs Villanova; the Madness Continues
Next St. Peter’s vs Purdue NCAA Tournament Preview