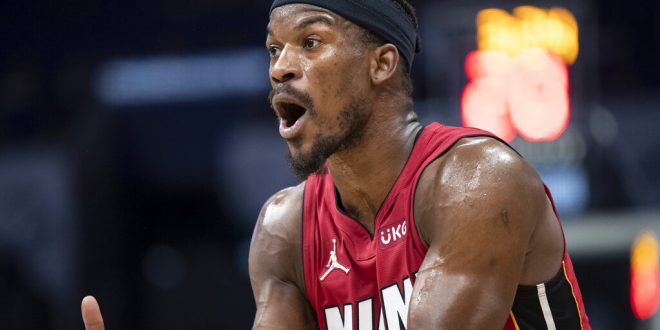 Miami Tempers flare as short-handed Warriors get the win, 118-104

It was a tense moment between Jimmy Butler and Udonis Haslem that summed up the night for the Miami Heat.

Despite missing their biggest stars, the short-handed Golden State Warriors still found a way to get the win against the top team in the Eastern Conference.

Between the shouting and the finger-pointing, tensions on the Miami bench were clearly high. Butler, Haslem and head coach Erik Spoelstra appeared to be at the forefront of it all.

Jordan Poole led the way for Golden State with 30 points and nine assists. Jonathan Kuminga, Andrew Wiggins and Damion Lee each added 22 points of their own as the Warriors cruised to 118 points on the night.

The Heat starting lineup put together a solid performance.

It was 26 points from Kyle Lowry that kept the Heat in the game going into the fourth. Bam Adebayo added another 25 points to the tally while Butler also 20.

Without Tyler Herro and Gabe Vincent, the Miami bench failed to contribute much to the scoresheet. It was just 13 points from the Heat outside of the starting five.

Despite the conflict on the bench and the eventual loss, Miami was in the game through three quarters.

After going into halftime at 50-50. Golden State opened the second half on a 19-0 run, but Miami overcame the major deficit and near fight on their bench to bring it within one point going into the final quarter.

In the last 12 minutes, Miami broke down defensively. The Heat gave up 37 points in the final frame as the game slowly got out of reach.

Race for the playoffs

Golden State is relatively solid in the Western Conference standings. The Warriors sit in third-place with a three-game gap between them and the fourth-place Utah Jazz.

They will travel to Atlanta to face the Hawks on Friday at 7:30 p.m.

With just nine games left, the Miami Heat remain in control of the top spot in the Eastern Conference. However, back-to-back losses have brought the Milwaukee Bucks within one and a half games.

Looking further down the table, the difference between the No. 1 Miami Heat and No. 4 Philadelphia 76ers is just two games, making the top-four race a tight one with just a handful of games to go.

The Heat will host the New York Knicks on Friday at 8 p.m.

Chris Will is a second-year journalism student with a focus in sports and media. Originally from the Fort Lauderdale area, Will is now the beat reporter for Florida Gymnastics and covers all things sports in Gainesville.
@_Chris_Will_
Previous Columbia Tigers Hope to Extend Win Streak vs Bishop Kenny
Next Tyreek Hill Traded to Dolphins