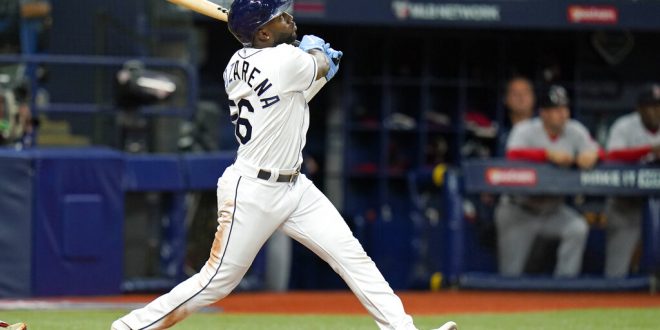 Rays Take Down Braves as Spring Training Starts to Wind Down

The Rays have struggled in Spring Training to this point, having won just four of their 11 games, but they shook off the dust on Thursday. Twenty two-year-old Luis Patino took the hill for the Rays and earned the win through two innings of work. Randy Arozarena shone in the game, going 3-for-4 with 2 RBI.

Tampa Bay drew 11 walks in the victory and five times in the third inning alone. Kyle Muller took the loss for the Braves, giving up four earned runs in 1.2 innings of work. The one highlight of the game for the Braves came when newly minted star Matt Olson crushed his first home run with his new team.

The Rays will face off against their AL East rival, the Red Sox, as well as the Twins and Pirates this weekend. After that, they’ll only have three more games of spring training before they open up regular season play with a game against the Orioles on Friday.

Former Florida Gator and current Rays catcher Mike Zunino is sidelined with injury for the time being. Rays manager Kevin Cash said he hopes the injury won’t prevent Zunino from playing in their first series.

Outside of that, Austin Meadows and Kevin Kiermaier returned to action in their game against the Braves on Thursday.

Notes on the Team

The Rays had a fairly quiet offseason; one move they did make was taking a chance on former Cy Young winner Corey Kluber. Another player that stands to be an absolute difference maker is Wander Franco. The No. 1 prospect debuted for the Rays in June and is preparing to play in his first full season in 2022. He’s already earned his paycheck too after signing a substantial contract with the Rays before the MLB lockout.

Shortstop Wander Franco and the Tampa Bay Rays are in agreement on a 12-year contract that guarantees him around $185 million, sources tell ESPN. The deal is worth a maximum of $223 million. It is done, pending small details. The 20-year-old is going to be a Ray for a long time.

In an offseason where the Yankees, Red Sox and Blue Jays all made splash moves, the Rays still hope to win the division and keep up their winning ways.

I'm a third-year student at the University of Florida passionate about storytelling and sportswriting. My goal is to work in communications for a professional sports team after I graduate.
Previous Seton Hall Introduces Shaheen Holloway as Men’s Basketball Head Coach
Next Elite Guards Jaden Ivey and Johnny Davis Declare for 2022 NBA Draft