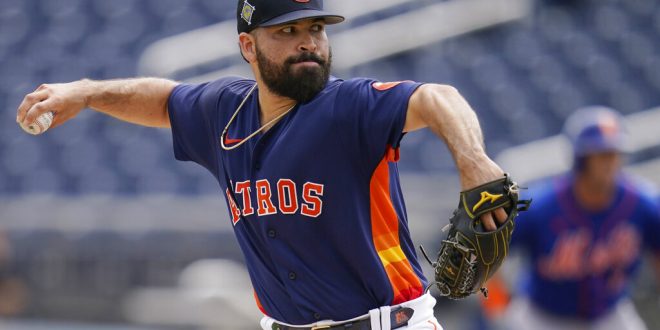 As Opening Day of Major League Baseball inches closer, we take a look at the intriguing AL West division. The AL West will provide one of the more interesting contests this season with many changes made this offseason. While most will automatically pencil in the Astros to take the division, they should not be too hasty in making that decision.

We’ll kick it off with the least likely and now primed candidate for one of the worst teams in the league. It ended last season 86-76, but will struggle to meet that win total for this season.

The Athletics made numerous offseason trades that ultimately put them on the backburner for competing. This offseason they moved first baseman Matt Olson (Atlanta Braves), third baseman Matt Chapman (Toronto Blue Jays) and pitcher Sean Manaea (San Diego Padres) to new teams. In return for these trades they mostly gained prospects for the future. They also let outfielders Mark Canha and Starling Marte walk in free agency to the New York Mets. As a result, this team will mostly be fielding new faces, but will still have key veteran players in Elvis Andrus, Stephen Piscotty, Tony Kemp and Sean Murphy to help guide it.

Opening Day for the Athletics is on April 8 where they begin their season against Bryce Harper and the Philadelphia Phillies.

With the Angles, it is always unclear on where they could end up. Last season they were 77-85, which pinpointed them at fourth in the AL West. However, there is always a chance to win with Mike Trout and Shohei Ohtani.

Ohtani, last season’s AL MVP, will look to continue his dominance on the mound and in the batters box. While it may be hard to replicate the 46 homeruns he hit last season, the Angles will need it if they want to compete in this division, especially when looking at the injuries Trout has sustained over the past two seasons. With Trout,  he has totaled just 89 games over the past two seasons. Yet, this team could be a threat for the race in AL West if he can stay healthy.

It did make a key addition to the roster by signing pitcher Noah Syndergaard. During Syndergaard’s time on the New York Mets, he had a career ERA of 3.32. He comes to the Angles hoping to rebound from his last season where he played just two games due to injury.

The Angles will take on a division rival in the Houston Astros on Thursday. This first game may provide to be a great outlook on the rest of the season for the Angles.

We have finally made it to the presumed AL West champions. There are pretty high standards for the Astros every season and this one is no different. After finishing 95-67 last season, they will look to make a similar run  by making it to the World Series.

One of the biggest moves of the season by any player came from former Astros shortstop Carlos Correa. Yes, former shortstop. Correa this offseason left the Astros to join the Minnesota Twins after being with the team since 2015. Now, just because they lost Correa does not mean all hope is lost for them. They still have potential all-stars in their lineup. They return Jose Altuve, Kyle Tucker, Alex Bregman and Yordan Alvarez among other players. Additionally, they were able to re-sign pitcher Justin Verlander to a one-year deal. This team is still loaded to make a run at the World Series in 2022.

They start their season off with the Los Angeles Angles on Thursday.

A serious threat to rival the Astros for the AL West. The Mariners proved last season they were no joke as they finished barely behind the Astros with a 90-72 record.

They brought in one of the brightest performers from last season in Jesse Winker from the Reds. Winker had a batting average of .305 with 24 HRs during last season with Cincinnati. Later in the offseason, they inked a five-year deal with 2022 AL Cy Young winner Robbie Ray to become the new ace of the Mariners. One last notable piece they added to the roster is Julio Rodriguez. He is one of their best prospects and will enter with high expectations on Opening Day.

Seattle’s Opening Day game will be against the Minnesota Twins on Friday.

We conclude our preview with the Rangers. They finished last in the AL West in 2021, but it could be a totally different story for them in 2022.

Texas made two of the most notable free agent signings this offseason. They signed shortstop Corey Seager from the Dodgers and second baseman Marcus Semien from the Blue Jays. These two signings could supply a major boost to this Rangers team that could potentially see it contending for a playoff spot. It also signed Jon Gray this offseason to help bolster its starting rotation.

They start their season on April 8 against the Toronto Blue Jays.

The show starts in 2. pic.twitter.com/TWbiSv8g3g